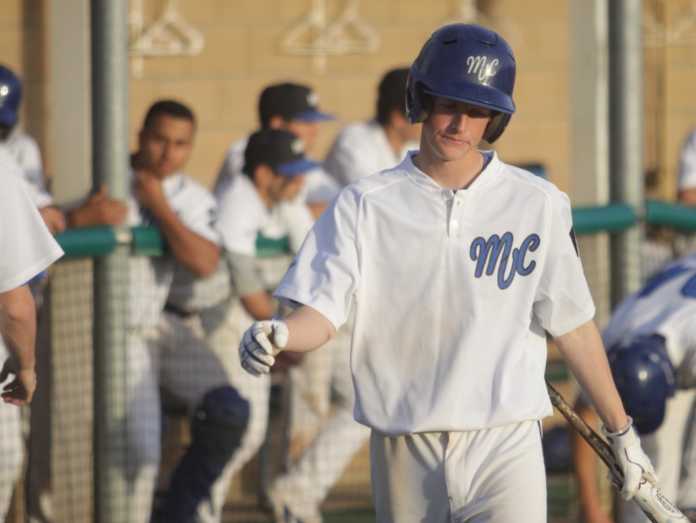 “They came out swinging pretty well, and our defense wasn’t great in the first inning,” said M.V.C. senior outfielder Garret Laine. “Having them start off with four runs gave them the momentum of the game.”

Mugan’s early bomb over the left field fence got Monterey (3-2, 1-0) off to a good start, and the ‘Dores piled on six more runs over the next two innings to grab a 9-2 lead heading into the fourth.

M.V.C. (3-2, 0-1) finally snapped out of its funk in the fifth behind a trio of triples from the heart of its lineup. But Monterey’s bullpen kept the Mustangs scoreless through the final two frames to exact revenge from last year’s season-ending defeat, which snapped the ‘Dores’ 26-year streak of making the Central Coast Section playoffs.

M.V.C. will get a chance to avenge the loss on Thursday at Sollecito Park in Monterey at 4 p.m.

“I liked how we fought a little bit. That was nice to see,” said M.V.C. head coach Case Rigby. “We’ve been having the same problems the entire season so far. We haven’t been clutch in clutch situations. We’ll see if that can change in the next little while.”

After winning their last three games leading up to Tuesday’s opener behind pitching and defense, the Mustangs played uncharacteristically with the glove and on the mound.

A pair of errors in the second inning produced two Monterey runs, and starter Jacob Beardsley lasted only 2 and 2/3 innings.

Junior pitcher Thomas Avila replaced him and threw well enough to give M.V.C. a chance late.

“After I found the fastball command, I felt like I was in a good position,” Avila said. “My defense did the work.”

M.V.C. wasn’t able to crack the ‘Dores’ starter until the fifth.

Sophomore outfielder Tyler Keenan, junior shortstop Ian Koenig and Laine all scored in the inning after hitting a double. Beardsley brought home Laine with a sacrifice fly, but that’s as close as the Mustangs came.

“The last few innings we played, I think, that’s how we should play the whole game,” Laine said. “That’s what I expect for the rest of the season.”

Laine was 3-for-3 with the double, RBI and scored run. Koenig had two scored runs to go along with his double and RBI. Junior utility Harrison Zischke scored a run.

Freshman Tyler Seal and sophomore Justin Deal each tossed an inning in relief of Bailey.