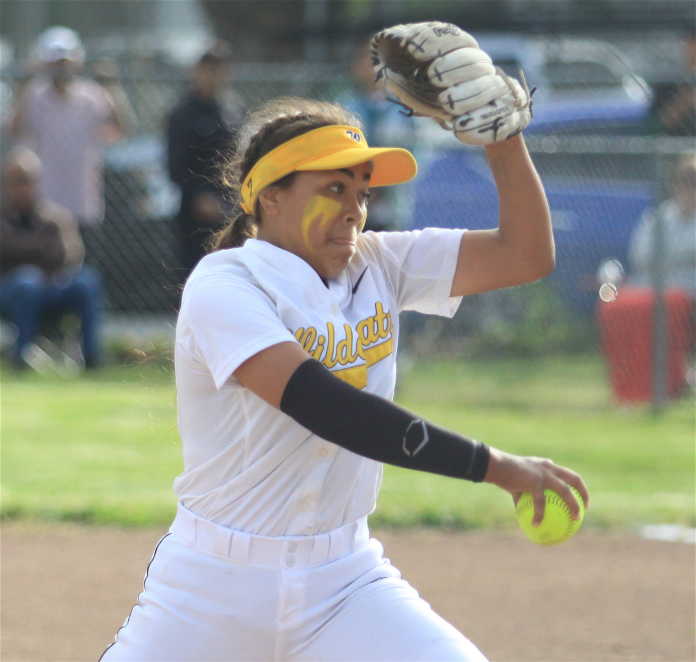 The Wildcatz are searching for answers during the toughest stretch of their most impressive season in recent memory. But they insist the answers are well within reach.

“I think we’re getting there,” Rodriguez said. “We’re getting close. We just need to work on something more.”

Watsonville (19-4, 7-4) — playing in its first year in the brutally tough MBL-G after winning the lower Pacific division in back-to-back seasons — got the game-winning run to the plate with only one out in the bottom of the eighth inning thanks to a pair of San Benito (21-4, 10-0) errors. But the Wildcatz, who lost to the Balers by a walk-off in their first meeting, could not exact sweet revenge with a walk-off winner of their own.

“It’s a lot different because we don’t have that big power — that thump,” said San Benito head coach Andrew Barragan. “Once we get rolling though it’s pretty hard to stop us.”

After starting the season with a program-record 14 straight wins, Watsonville has gone just 5-4 and lost three of its last four — all four losses have been by two runs or less. Still, Wilson said that his players’ confidence in their ability was not shaken after the loss, which marked the first time the Wildcatz have dropped back-to-back games this season.

“They’re looking at it as, ‘we have a lot of work to do,’” Wilson said of his team, which entered Thursday’s tilt as the No. 5 ranked team in the section, according to Maxpreps — San Benito was the top-ranked team. “We’re not done. They’re looking forward to putting Watsonville softball tradition on the map and making it a statement of, ‘this is one of the programs that you have to pay attention to.’ They take pride in that.”

Watsonville is almost guaranteed to make the upcoming CCS playoffs. A third-place finish in the MBL-G would get them into the postseason automatically but the Wildcatz also figure to advance on CCS power points as an at-large team if they place outside of the top three.

The Wildcatz will wrap up the regular season next week against North Salinas High on the road.

“Going into next week’s game we have to be focused,” Wilson said. “We have to do what we know and have no fear. No doubt, no fear and just go. Go, go, go.”

Rodriguez took the loss but was solid in the circle and at the plate. She allowed 10 hits and a walk, while striking out 10 batters. Rodriguez went 3-for-4 with the bat and drove in Watsonville’s lone run in the fourth inning to tie the game up at 1-all.

“I promised our seniors that I’d pitch my heart out for them in this game,” said Rodriguez of her five teammates that were honored before Thursday’s first pitch: Crystal Torres, Liyah Lopez, Leah Maldonado, Nicole Wilson and Victoria Moran. “I did. I really did. Defense did good, too. We just kind of slipped.”

The Wildcatz piled up 12 hits and had runners in scoring position in five innings but couldn’t get the clutch hit they needed off San Benito’s junior starting pitcher Amanda Moisa, who went 6 and 2-3 innings before giving way to Woeste.

Watsonville’s best opportunity at breaking the game open came in the bottom of the fifth. Lopez, a second baseman, hit a single to load the bases with one out but the Wildcatz couldn’t capitalize on the opportunity. Freshman outfielder Angelina Heredia hit into a fielder’s choice and sophomore outfielder Emily Orneales grounded out after working Moisa into a full count.

San Benito’s two-out rally three innings later proved to be the difference. Sophomore catcher Amber Rodriguez started it off with a double, junior first baseman Ayla Gabel moved her over with a single and junior right fielder Chloe Cortez knocked them in with a single up the heart of the defense.

Watsonville had runners on first and third with one out in the bottom of the eighth but Woeste did well to get out of the jam and shut the door on the Wildcatz, who have made a name for themselves in the MBL-G despite the recent losses.

“That pitcher and catcher (sophomore catcher Juliana Wilson), that sophomore combo, I mean, Jesus, next year and the year after that, man,” Barragan said. “These are the games that we’re going to be looking forward to over the next few years.”

Wilson said his Wildcatz still have plenty of softball to be played after next week.

“It’s been a good run and it’s not over,” the coach said. “The teams that we have lost to, for us, we see it as tough losses — without a doubt. No team that we lost to blew us out. They were good games, close games, good battles. These girls know that. They know that they can compete with anybody. It’s just those situations and scenarios that they have to overcome. They have to experience them in order to grow from them.”