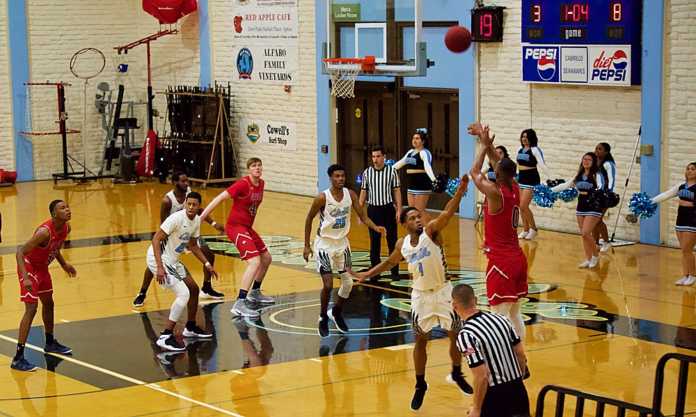 APTOS — Some games matter more than others.

Wednesday night’s game in the Adobe Palace had been circled on calendars around the Coast Conference South since the conclusion of last season.

The Gavilan College Rams last season were forced to split the conference championship with the Cabrillo College Seahawks after both teams failed to protect their home courts.

Wednesday’s night’s game was tabbed as a face off between two of the top 15 teams in the state (Gavilan No. 7, Cabrillo No. 14), according to the most recent poll released by the CCCMBCA.

“We pretty much treated this game like it was a state championship game,” said Gavilan guard DJ Burgess.

Gavilan opened the game by establishing a commanding 17-1 lead in the first five minutes.

The Rams would not relinquish control for the rest of the night en route to their 74-64 victory.

Cabrillo (13-5, 1-1) mounted multiple attempts to recover from the early offensive blitzkrieg launched by the Rams (16-2, 2-0), shrinking the lead to as little as two points, but ultimately submitted.

The Rams shot 50 percent from the field, 33.3 percent from 3-point range and made 80 percent of their free throws. Gavilan drained twice as many 3-point attempts (8) as Cabrillo’s (4), despite the Seahawk’s Trey Whitley going 4-of-6 from beyond the arc.

After the game some Seahawks players were visibly upset and frustrated by their performance in front of the home crowd. Sophomore forward Yeskin Williams was particularly vocal about what he perceived the root of the problem.

“We got to adjust,” Williams said. “I played my heart out, but it don’t matter if they (Gavilan) taking uncontested 3’s from outside our zone. We got to step out there and disrupt that shot.”

Other players, like sophomore forward Lenorris Mincey, were more measured in their criticisms.

“We just got to focus on getting out to the wings and on their shooters,” Mincey said. “Everything should be fine, we was right there with them in the beginning. We just got to fill up these holes.”

Williams was whistled for a flagrant foul in the first half when he and Gavilan coach Dallas Jensen exchanged heated words on the sidelines during an inbounding play.

Jensen, who also received a technical foul for the incident, explained after the game the dust up was the result of a misunderstanding between the two men.

“It was a miscommunication,” Jensen said. “I think (Williams) is a great player, a great kid.”

The Rams built up multiple leads over the course of the game behind a balanced offensive attack in which all five starters scored in double digits. Every time the Seahawks started to key in on a specific scoring threat, the Rams seamlessly shifted to the next man on the floor.  Each starter had at least seven field goal attempts.

As the second half wore on, the Rams kept their choke hold on the tempo by draining the clock and refusing to make an attempt to score until there were five seconds or less remaining on the shot clock.

“I thought as the second half went along it was really important to focus on time and possession,” Jensen said. “We are always open to pushing tempo and pushing the ball up the floor but if something isn’t there we want to make sure we are being really efficient and getting what we want out of each possession.”

Burgess, a sophomore alumni of Valley Christian, led Gavilan in scoring with 19 points on a lights-out shooting night that saw him go a combined 11-of-16 from the field, including 3-of-5 from beyond the arc.

Gavilan big man Daylon Potts, an alumnus of Edison High, put on a show with 11 points, 11 assists, seven rebounds and two steals. His stat line belies his actual influence on the game as a box out presence and as a paint stopper.

Cabrillo’s Whitley, a captain and guard who attended Harbor High, had a game-high 30 points in the loss. Whitley continued to be the Seahawks’ best pure shooter draining 14-of-20 total attempts from the floor and 6-of-8 from the charity stripe.

The two teams will meet again in Gilroy on Feb. 8 to likely decide the fate of the CC-South.