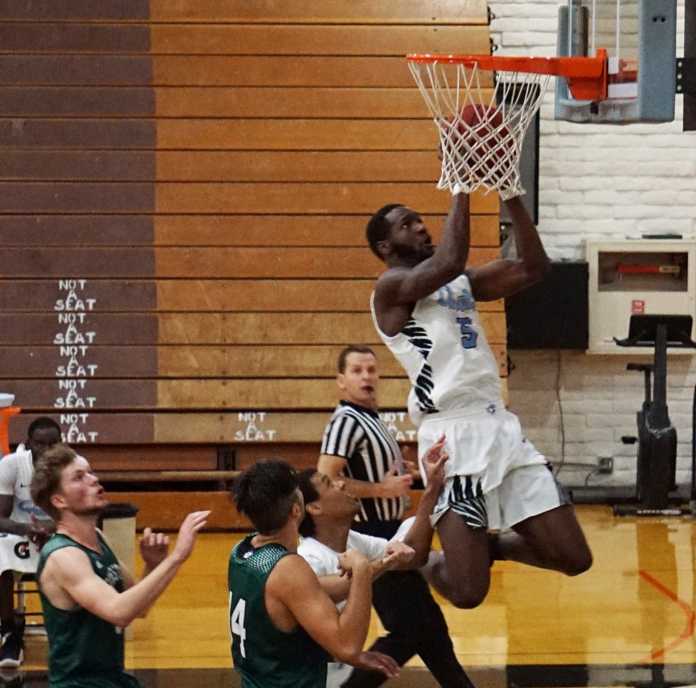 APTOS — To be the best, you have to beat the best.

Last season, the City College of San Francisco Rams were the best, as they went 33-1 and won the California Community College Athletic Association state championship.

C.C.S.F. defeated the Cabrillo College Seahawks three times in the 2017-18 season, including a 17-point blowout in the Sweet Sixteen.

On Dec. 16 the Seahawks emerged with a four-point victory over the Rams in the preseason tournament title game of the San Joaquin Delta Classic.

Longtime head coach Tony Marcopulos said that win means nothing — neither does their impressive 11-3 preseason record.

“It was a preseason win,” said Marcopulos. “No one cares about preseason records. This team has a chance to be good, but it has a long way to go.”

Over the past 19 seasons Marcopulos has built men’s basketball at Cabrillo College from perennial cellar dweller into a conference powerhouse. In nine of the last 11 years, the Seahawks have been named at least co-champions of the Coast Conference South, and produced five of the last six conference MVP’s.

This season’s campaign has already endured adversity in the form of a temporary medical leave by Marcopulos for nine games, and attrition in the permanent loss of sophomore center Avery Edwards, who was dismissed for violation of team policies on Dec. 14.

During Marcopulos’s leave of absence, longtime assistant James Page dutifully guided the team to a 7-2 record featuring a six-game win streak culminating in the upset victory over C.C.S.F.

Most of the players on this year’s team have aspirations of playing at the next level, ideally with a scholarship, and a couple have real potential to play on TV next season.

Sophomore guard Trey Whitley (6-foot) serves as the cornerstone for the construction of this year’s title run, providing leadership between the baselines and outside of them. A local product who played at both Harbor High and Santa Cruz High, Whitley is an amiable dynamic scorer who also possesses high-level court vision.

Since last year’s heartbreaking Sweet Sixteen exit, Whitley has been in the gym building a stronger body and a deeper sense of the game. His regiment of strength training has yielded 30 pounds of new muscle that enables him to become a more physical and resilient player.

“I train every day,” said Whitley. “I am always working on my game.”

Sophomore forward Lenorris Mincey (6-5), from Apopka, Fla., has flashed the ability to take over games for stretches, making him a dangerous consideration for any opponent and remarkably entertaining for spectators.

“I truly believe you get what you work for, so that’s why I play like it’s my last game ever,” said Mincey.

This is only his third year focusing exclusively on hoop, and his raw talent is still being forged game by game. Mincey’s roots in football are often displayed by his physical style of play that blends speed, power and selfless sacrifice for the sake of keeping possession of the ball.

Initially the sixth man in the rotation, Mincey has embraced the opportunity to start in the wake of Edwards’ dismissal prior to the San Joaquin Delta Classic, averaging a double-double with 14.5 points and 11 rebounds over the last four games.

Hours after being named a starter, Mincey exploded for 20 points and seven rebounds against Reedley College, and was eventually named MVP of the tournament.

Every team needs a larger than life personality to provide humor and motivation over the course of a season, and this year forward Yeskin Williams of Pearland, Texas, fills that role. Williams transferred to Cabrillo after playing in just one game for University of South Carolina-Upstate Spartans, a NCAA Division I program, last year due to the head coach retiring.

“I got there and he bounced,” said Williams of his coach. “Thankfully (Marcopulos) helped me get that year of eligibility back.”

The 6-foot-6 forward’s distinctive emotive chirps over the course of the game transcend the crowd noise whenever he makes a crucial play, making the human super ball one of the most entertaining players in the area.

Statistically, Williams is one of those players that seems to contribute in all facets of the game both on and off the stat sheet. In addition to leading the team in blocks (1.0) and steals (2.0) per game, he ranks second in rebounds (6.9) and assists (3.0) per game.

This versatility is accentuated by his massive wingspan, which makes him an absolute wall on defense when the Seahawks sink into their suffocating 2-3 zone.

Swing forward Davon Northcutt, a 6-foot-5 sophomore who played high school hoop at San Lorenzo Valley High, rounds out the frontcourt for the Seahawks by filing the holes in his teammates’ game with a “jack of all master of none” style.

Over the course of the preseason, Northcutt has established himself in the rotation as a valuable two-way starter who shoots a respectable 35.7 percent from beyond the arc, provides the crucial pass that leads to an assist and who is willing to crash the boards (5.6 rpg).

The coaching staff has a bench peppered with guards and forwards that offer flexibility based on the teams needs in a given game.

Hunter Seymour, a 6-foot-8 forward from Charlotte, N.C., will spell the starting big men this season. Seymour’s ability to be an effective defensive presence and rebounder is slightly offset by his lack of offensive potency. Freshman guard Dymond Hanks (6-2) of Sugar Land, Texas has the ability to slash through the lane and elevate while also providing a smooth stroke from 3-point land, making him a dynamic game changer.

Hanks is one of the few freshman on the team getting regular playing time following an early season injury to fellow freshman guard Gabe Mack (foot).

Cabrillo tips off conference play against San Jose City College in San Jose Wednesday night, and will open its home schedule against rival Gavilan in the Adobe Palace on Jan. 16.

Last season Cabrillo split the regular season matchup against the Gavilan College Rams. The Seahawks won the first matchup in Gilroy by five, and the Rams won by four in the second game in the Adobe Palace.

“We all came together (to Cabrillo) to win, not just the conference, but all of it,” Williams said. “We want the SF Citys, the LA schools, and the Gavilans. They don’t scare us. We want to become state champions and get to the next level. Winning is the best way to do that.”

Why he’ll be great >> Williams is an athletic freak who dives for loose balls, fights for rebounds and plays tough defense

Why he’ll be great >> A true “D”-and-3 guy on the wing, Northcutt makes all the small plays to keep the offense flowing