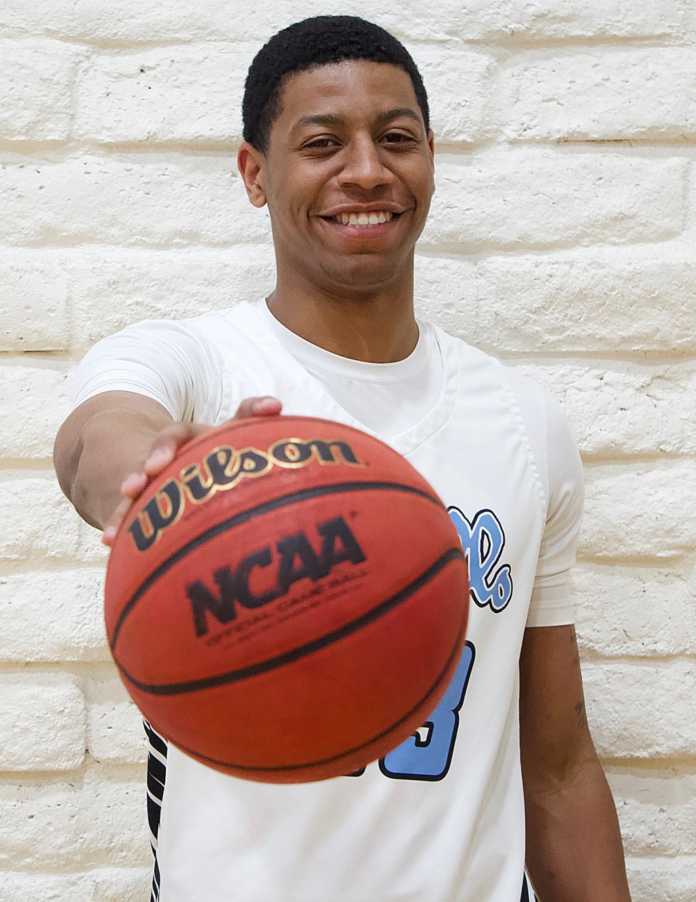 Needless to say, standing out on this court requires a special blend of skill and ability — two things Hunter Seymour has in spades.

“You could put him against Michael Jordan in the driveway and he would kill ‘em,” Harry Seymour said. “Hunter is a driveway superstar. Now it’s just a matter of getting him to transfer that skill onto the court.”

Hunter Seymour’s parents, Harry and Jenene Seymour, played D-I college basketball and his older brother, Adonis Alexander, played football at Virginia Tech before being drafted by Washington to play cornerback. Jaden Seymour, Hunter’s youngest brother, is projected to be one of the most coveted forwards in next year’s recruiting class and has already drawn interest from programs like N.C. State, Butler and Boston College.

With just one year of organized basketball under Hunter Seymour’s belt, it’s no wonder the 6-foot-8, 215-pound forward from Charlotte, N.C., keeps revealing more and more of the driveway superstar awakening within him during Coast Conference South play.

“That guy is so talented,” said Cabrillo sophomore guard Trey Whitley. “And he keeps getting significantly better every game…It’s scary to think of what that dude’s ceiling may be.”

A natural forward who played point guard in high school, Seymour has had to embrace the role of defensive center to find a place in the Seahawks’ starting line up. In six games as a starter, Seymour has accumulated 44 rebounds, 28 points, 18 blocks, five assists and four steals for Cabrillo, who tonight travel to Gilroy to play Gavilan College in a game that could determine the conference championship.

It has been said that players at the junior college level are there for a reason, be it their lack of height, size, speed, experience or proven ability against high level opponents. Sometimes, though, there is a glitch in the matrix, and players with elite raw ability find themselves in the California Community College Athletic Association.

Hunter Seymour made the decision to come west to prove and improve himself both as a baller and a man while satiating an internal desire to blaze his own trail.

As a freshman and sophomore in high school, Seymour was not a star basketball player. In fact, he didn’t play any sports at all.

It’s not as if the coaches at Northside Christian Academy didn’t try to recruit the long young man from the family of athletes, but their pleas fell on deaf ears.

“I don’t know, I just wasn’t interested,” Seymour said. “And then when I went to military school for my junior year, they talked me into (basketball).”

After struggling to find a groove during his first two years of high school, the decision was made by the Seymour family that a year enrolled at Fork Union Military Academy in Virginia was in order. The opportunity to play organized basketball for a disciplinarian head coach, like his father had before him, while enrolled would prove to be the icing on the cake.

“We didn’t force it,” Harry Seymour said. “But we understand what sports does for kids in development and prepares them for the real world. It teaches them accountability, and makes them employable.”

Harry Seymour spent a prep year at Tennessee Military Institute, where a hard-nosed coach prepared him for the student-athlete experience. After only playing one year of high school basketball, Harry Seymour felt he needed the opportunity to hone his game and learn how to balance the academic load before moving on to college.

“You don’t want to look back at these times, and the opportunities that are in front of you, and regret it,” Harry Seymour said. “I give (my sons) specific stories about friends of mine they’ve met, and teach them to make the most of every opportunity.”

The choice to enroll was a family decision, and one that Hunter Seymour stepped into well aware of what was at stake.

“I made the most out of it,” Seymour said. “And it got me back into basketball.”

His time at F.U.M.A. taught Seymour that self-discipline was necessary to truly maximize his abilities. While enrolled in the academy, Seymour’s days were built around early mornings, and a rigid routine that stressed attention to detail, consistency and the value of self-improvement.

The experience still echoes today in the way he approaches his time in Aptos.

During the semester, Seymour’s days start by 7 a.m., a remarkable feat for any college student, followed by a quick breakfast before he leaves to campus for class, after which he can regularly be found in and around the Adobe Palace putting shots up during “open shoot around.” Then it’s time to watch film followed by practice.

After all that, Seymour still finds the time to bust out the books to stay academically eligible, locking himself in his room and away from distractions.

It’s an exhausting schedule, but after his time in a paramilitary environment, the jammed packed itinerary has become routine.

“That’s the thing about Hunter,” said Cabrillo assistant coach James Page. “He knows what it takes to be successful in this game. He puts in the work between practices, he’s always working on his game and has embraced everything we have thrown at him as far as playing out of position.”

Seymour’s opportunities of playing at the D-I level in his first year out of high school were hindered because he was forced to sit out his senior season at Northside Christian Academy following his return from F.U.M.A. due to North Carolina transfer rules.

So the Seymour family looked west, and found Aptos.

The decision to become a Seahawk was a by-product of the reputation coach Tony Marcopulos and Page have earned for developing their players. In addition to being an established junior college program known for sending players on to the next level, Cabrillo could also offer Seymour the opportunity to develop away from the long shadows cast by his gifted brothers.

Despite his military academy preparation, the shores of Santa Cruz still proved challenging to navigate upon his arrival. After growing up in a southern suburban community, the move to California’s Central Coast, where everything from the atmosphere to the social climate is different, made finding his stride off the court a daunting task.

Marcopulos’ high standards on the court made the transition even tougher.

“I thought I wanted it real bad, then I got here,” Seymour laughed. “Coming [to Aptos] was a culture shock for me, and it was a lot of work. But after working through that, working with Tony, it’s working for me… Tony is definitely a detail-oriented coach, there is a lot of structure, and he is very instructional about what he wants you to do. He has built me back up with a lot confidence. There isn’t much time that I am around him that he doesn’t push me to become better.”

Considering Marcopulos’ experience coaching and developing players, that shouldn’t come as a shock. Back in 1994, when Marcopulos was an assistant coach at University of Pacific, he recruited and developed a raw unknown 7-foot basketball player from London by way of Nigeria, named Michael Olowokandi. Three years later Olowokandi was drafted first overall in the 1998 NBA Draft by the Los Angeles Clippers.

That isn’t to say Seymour could be drafted straight out the junior college level to the NBA, but as his second season of organized basketball wraps up the courts around the Coast Conference South are starting to resemble that stretch of asphalt in front the Seymour family home more and more.