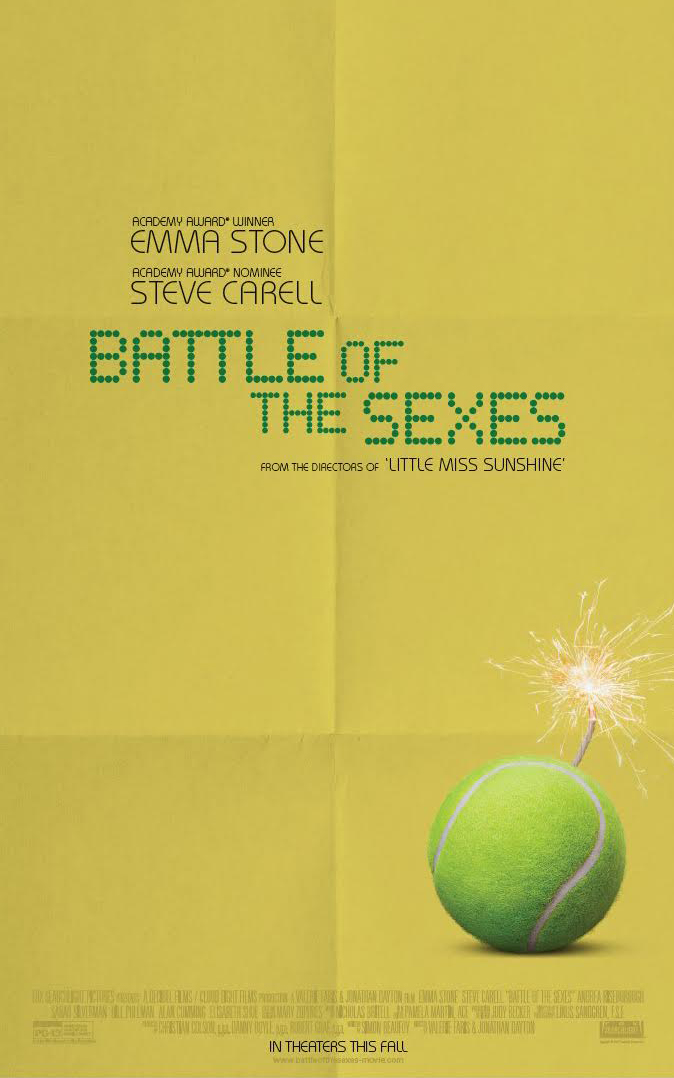 Emma Stone is a terrific actress but there’s something off about her performance as Billie Jean King in “Battle of the Sexes.” Stone (“The Help,” “La La Land”) never blends into the role of the tennis superstar turned women’s rights activist. The look is off and, more importantly, the attitude never feels like classic King. I don’t think this is Stone’s fault — not completely — but because of this “Battle of the Sexes,” co-directed by Jonathan Dayton and Valerie Faris, ends up feeling like cosplay.

“Battle of the Sexes” tells the true story of the famous 1973 tennis match between the world’s top female player, King, and Bobby Riggs, a former men’s tennis star and serial hustler who was hell-bent on making a joke of women’s sports. It was a great story then and is extremely pertinent today, too, which is why I’m disappointed with the finished product.

Stone isn’t the only one in this movie that feels out of place. Everyone outside of the Riggs family seemed like a miscast. Steve Carell (“The Office,” “The 40-Year-Old Virgin”), however, was absolutely perfect as Bobby. There’s no doubt that he has the comedic chops but Carell is extremely underrated in dramatic roles. He has a knack of somehow blending into roles that at first don’t seem to fit him but later feel like he was born to play.

All the wacky and chauvinistic acts that the real-life Bobby was pulling during the lead-up to the match was just a mask he used to hide the fact that he was a broken man, addicted to gambling and grasping for attention. Dayton and Faris did a commendable job in humanizing Bobby and his character always felt grounded.

Every time he was off camera, I found my mind wandering away from the action on the screen and wondering what Bobby was doing. King is such a giant figure with a massive personality. Her role in women’s sports during that time period and today is tough to put into words. I would love to say that Stone, Dayton and Faris did King justice but they did not. Maybe my familiarity with the match ruined this for me. Either way, I left the theater wanting more. Much more.

“Marshall” — About a young Thurgood Marshall, the first African-American Supreme Court Justice, as he battles through one of his career-defining cases.

“The Foreigner” — A humble businessman with a buried past seeks justice when his daughter is killed in an act of terrorism. A cat-and-mouse conflict ensues with a government official, whose past may hold clues to the killers’ identities.

“Happy Death Day” — A college student relives the day of her murder with both its unexceptional details and terrifying end until she discovers her killer’s identity.

“Professor Marston and the Wonder Women” — The story of psychologist William Moulton Marston, the polyamorous relationship between his wife and his mistress, the creation of his beloved comic book character Wonder Woman, and the controversy the comic generated.

“Breathe” — The inspiring true love story of Robin and Diana Cavendish, an adventurous couple who refuse to give up in the face of a devastating disease. Their heartwarming celebration of human possibility marks the directorial debut of Andy Serkis.