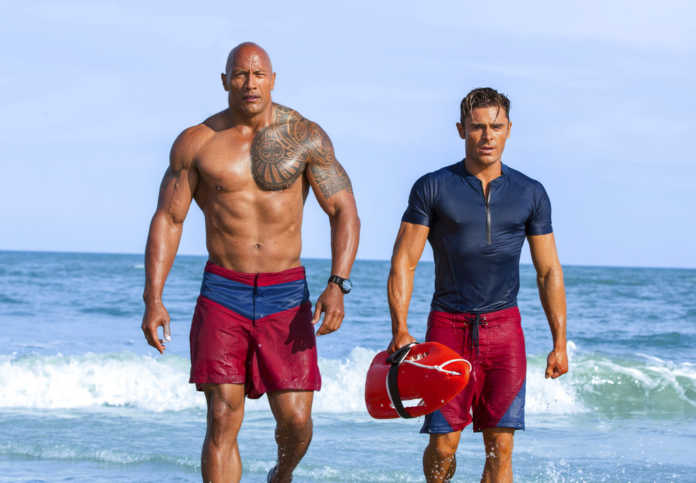 There is so much off about “Baywatch” that it is tough to narrow down the list of gripes to just a few hundred words. In a nutshell: the characters are paper thin, the visual effects look like a 1990s video game, the action set pieces are only passable and there are several scenes that have no purpose and bog down the pace. But its biggest flaw is that it is not funny. Not belly-laugh funny, not chuckle funny and not even small-grin funny.

I lost count of how many unnecessary f-bombs were thrown around and all the below-the-belt humor was unoriginal, drawn-out and just plain dumb. The film is definitely deserving of its “R” rating but all of its “adult humor” seemed more geared toward pre-teens. Being vulgar for the sake of being vulgar isn’t funny. It’s childish.

Director Seth Gordon (“Horrible Bosses”) doesn’t have much to work with in terms of story in this silver-screen reimagining of the beloved ‘90s television show. Mitch Buchannon, played by Dwayne Johnson (“Fast & Furious 6,” “San Andreas”), and Matt Brody, portrayed by Zac Efron (“Neighbors,” “High School Musical”), hate each other but are forced to team up to infiltrate a secret drug operation that is taking place on their beach. This premise has worked before … cough, cough … “21 Jump Street” … but the turns(?) that this film take are so painfully predictable that I consistently asked myself, “How did they not see this coming?”

But that’s what “Baywatch” is. All the men in this movie have no common sense and the women are only there to sleep with them or look surprised. Alexandra Daddario (“San Andres”), Kelly Rohrbach (“Broad City”) and Ilfenesh Hadera (“Old Boy”) are all OK in their limited roles but could have been great if they were each given more than 10 lines. Jon Bass is there for slapstick comedy but all of his scenes feel like they were spliced in from another movie.

I actually enjoyed Priyanka Chopra as Victoria Leeds, the head of the drug operation, and Johnson and Efron have chemistry whenever they’re on the screen together but the problem is the material they’re given is garbage. Efron’s character goes from being a cocky know-it-all to forgetting how to tie his shoes halfway through the movie, and Johnson’s oozing charisma that helped make him the biggest movie star today is wasted by a crappy script that has him end almost every line with the word “brother.”

This could have been a good movie. It has all the pieces and all the players in the right places but never lets them shine. I came in expecting “21 Jump Street” meets 2004’s “Starsky and Hutch” but left with the sour taste of something closer to “CHIPS.” Even David Hasselhoff’s cameo is squandered. Avoid this movie.

COMING SOON
– “Wonder Woman” — Before she was Wonder Woman she was Diana, princess of the Amazons, trained warrior. When a pilot crashes and tells of conflict in the outside world, she leaves home to fight a war to end all wars, discovering her full powers and true destiny.
Director: Patty Jenkins
Cast: Gal Gadot, Robin Wright, David Thewlis, Connie Nielsen

– “Dean” — A comedy about loss, grief and the redemptive power of love, Dean is an NY illustrator who falls hard for an LA woman while trying to prevent his father from selling the family home in the wake of his mother’s death.
Director: Demetri Martin
Cast: Asif Ali, Jesaiah Baer, Kathrine Barnes, Kate Berlant