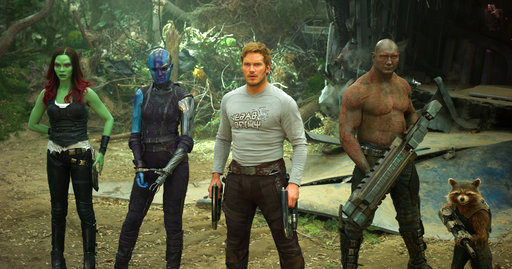 I was afraid this was going to happen. It looked bloated. It looked too corny. It looked like a cartoon version of the first.

“Guardians of the Galaxy Vol. 2,” disappointingly, is just that. There is no real sense of purpose to this film and there is way too much going on for its own good. The sequel to director James Gunn’s smash hit — and my favorite Marvel cinematic universe movie — is an overstuffed mess. It’s a fun mess, but a mess nonetheless.

Our five original galactic anti-heroes Peter Quill, Gamora, Rocket, Drax and Groot, now in adorable baby form, are back while Nebula and Yondu also return in expanded roles. The Guardians split up at the end of the first act and the film slows to a crawl while it flashes pretty special effects and several cricket-inducing jokes.

The humor in the original was great because it never felt out of character. It never felt forced. It never felt like a bad stand-up comic working through a few stinkers at a Wednesday night open mic. Dave Bautista (“Spectre,” “Guardians of the Galaxy”) as the straight-faced Drax has some gut-busting moments throughout but many of them seemed so shoehorned in that I’d rather have gone without them — especially the poop joke.

Like the first, the film tries to be a story about family but doesn’t hit the mark on its themes. There’s some great history between Chris Pratt’s (“Jurassic World,” “Passengers”) Quill and Michael Rooker’s (“The Walking Dead,” “Guardians of the Galaxy”) Yondu but the two — easily the standouts of the film — rarely share screen time and there was little dialogue that connected the two enough for me to care. That huge omission ultimately hurts the film’s final payoff for those that have not seen the first.

Kurt Russell’s (“The Hateful Eight,” “The Thing”) Ego felt like the most complete character of them all but his relationship with Quill goes from scared orphan in a new home to tossing around the ball with his pops in the backyard in minutes. The relationship was not believable because there was no time to develop it.

But this is what happens when a movie tries to do too much with too many tools. It gets overstuffed and underdeveloped, leaving a solid storyline of family — namely the father-son relationship — on the cutting-room floor for comedy and passable action that tries to strike a chord and remind people of why they fell in love with this band of misfits in the first place.

COMING SOON
– “King Arthur: Legend of the Sword” —  Robbed of his birthright, Arthur comes up the hard way in the back alleys of the city. But once he pulls the sword from the stone, he is forced to acknowledge his true legacy — whether he likes it or not.
– Director: Guy Ritchie
– Cast: Charlie Hunnam, Astrid Bergès-Frisbey, Jude Law, Djimon Hounsou

– “Snatched” —  When her boyfriend dumps her before their exotic vacation, a young woman persuades her ultra-cautious mother to travel with her to paradise, with unexpected results.
– Director: Jonathan Levine
– Cast: Amy Schumer, Goldie Hawn, Kim Caramele, Raven Goodwin

– “The Wall” — Two American soldiers are trapped by a lethal sniper, with only an unsteady wall between them.
– Director: Doug Liman
– Cast: Aaron Taylor-Johnson, John Cena, Laith Nakli

This week in Pajaro Valley’s Past, March 5