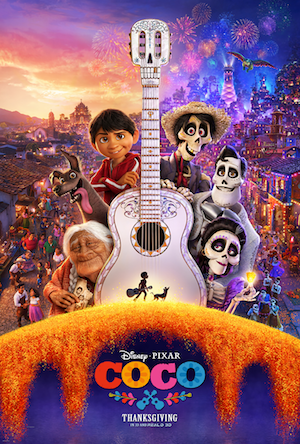 If you have not yet seen “Coco,” then here is my short review for you: go watch it.

This film is that good… or at least it resonated with me on that level and I believe it will with just about everyone that lays eyes on it.

For those that don’t know me personally — or can’t tell by my ugly, outdated mugshot that accompanies this column — I am Mexican-American. I was born south of the border and I grew up in sort of the same environment in which this Disney-Pixar masterpiece was based in before moving into the U.S.

No other movie has quite captured the “family-comes-first” Mexican culture — both the good and the bad that comes with it — that is engrained in who I am. “Coco” is like a love letter to the culture, those who grew up in it and those who appreciate it. There is hardly any pandering here. All references and cameos — there are some great ones that I won’t spoil — range from well-done to perfect.

I’m happy to say that writer-director Lee Unkrich (“Toy Story 3”) and Co. do a perfect job of bringing those unfamiliar with the culture and Dia de los Muertos up to speed in a zip.

This film hums. There might be a handful of shots that linger a little too long and one or two that felt like they could’ve been cut. But these are minor nitpicks for a movie that has impeccable pacing, which is maybe only rivaled by the bright and colorful visuals on both the side of the living and the dead.

The story is simple enough but it’s so heavily drenched in Mexican culture that it feels fresh. Miguel, satisfyingly voiced by Anthony Gonzalez, is a young boy in Mexico who has dreams of becoming a famous musician. In the way of his dream? His family — both dead and alive — that has deemed any type of music taboo. I want to say more but I don’t want to spoil any of the twists or turns — and there are plenty.

Gael Garcia Bernal and Alanna Ubach are excellent in their roles as Hector and Imelda, respectively, but Renee Victor steals the limelight whenever she’s on screen as Abuelita.

There are not enough good things I can say about “Coco” but the most important is that it is rooted in emotion and family. This film makes you care. It makes you laugh, it makes you think, it makes you sad and it’ll bring you to tears if you let it.

“The Disaster Artist” — When Greg Sestero, an aspiring film actor, meets the weird and mysterious Tommy Wiseau in an acting class, they form a unique friendship and travel to Hollywood to make their dreams come true.

“The Shape of Water” (LIMITED) — An other-worldly fairy tale, set against the backdrop of Cold War era America circa 1962. In the hidden high-security government laboratory where she works, lonely Elisa (Sally Hawkins) is trapped in a life of isolation. Elisa’s life is changed forever when she and co-worker Zelda (Octavia Spencer) discover a secret classified experiment.