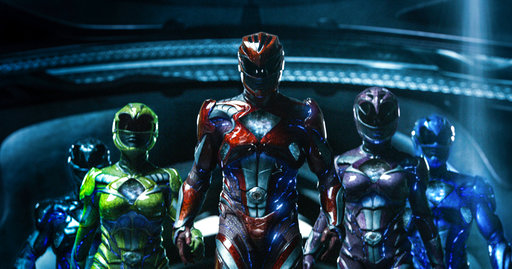 When word came down the pipe that the Power Rangers were getting a movie, I had major doubts as to how successful the adaptation of the campy 1990s kid show would be. Would they keep the cheesy “it’s morphing time!” quotes and the ridiculous back-flip reaction to punches and explosions, or would they try to update it and make it for a more mature audience?

Well, it’s a mixed bag. There are some moments that are similar to “Chronicle,” Josh Trank’s 2012 film about three teenagers that stumble upon super powers, but there are also moments when director Dean Israelite’s “Power Rangers” feels like a Saturday afternoon cartoon. The entire third act devolves into the latter, actually, and I think that it’s an intended nod to the original material. Yes, the “Go Go Power Rangers” theme song is in this movie and the hero shot of all the Zords rushing into battle is also stuffed in there for nostalgia purposes. But the film isn’t so much about the action.

No, Israelite’s take on the color-coded super heroes tries and at times succeeds in being a character film. The Power Rangers aren’t the goodie two shoes of the past. They’re all screw ups and outsiders. Confused teenagers that are alone and ready to find their purpose. It’s a weird “Breakfast Club”-esque mix that works not because the writers gave the actors great lines to read but because Dacre Montgomery, Naomi Scott and RJ Cyler do a magnificent job carrying the film’s dense second act.

Montgomery is Jason/Red Ranger, Scott is Kimberly/Pink Ranger and Cyler is Billy/Blue Ranger and the trio’s chemistry is solid, especially the initial relationship between Montgomery and Cyler at the beginning of the film. Ludi Lin’s Zack/Black Ranger and Becky G.’s Trini/Yellow Ranger are introduced a little later in the film than their partners and both are given enough screen time to stand out, yet never really do. Bryan Cranston and Bill Hader are passible in their roles as Zordon and Alpha 5, respectively — mostly because they don’t have much screen time to make an impact — but Elizabeth Banks’ cartoony and over-the-top Rita Repulsa was a microcosm of the film.

The tone is messy. It’s a film that tries to beat you over the head with how mature it is with its on-going father-son drama at Jason’s house but 30 seconds later is back to slapstick humor with the Power Rangers’ training sessions. It was jarring and it made me confused as to who the intended audience is for this film.

Sure, 20-something year olds and above will feel like their 8-year-old selfs from time to time during this two-hour trek down memory lane but I don’t think that 8-year-olds should watch this movie — not with some of the mature humor akin to a Judd Apatow film — even though it has plenty of moments best suited for preteens. It tries to be the one-size-fits-all movie but falls a little short. Still, I had fun.

“Power Rangers” is a true popcorn flick that has some heart. Lovers of the original property will enjoy the fresh take and newcomers won’t be bored looking down at their watch ready for it to end.

• “Ghost in the Shell” — In the near future, Major is the first of her kind: A human saved from a terrible crash, who is cyber-enhanced to be a perfect soldier devoted to stopping the world’s most dangerous criminals.

• “The Boss Baby” — A suit-wearing briefcase-carrying baby pairs up with his 7-year-old brother to stop the dastardly plot of the CEO of Puppy Co.