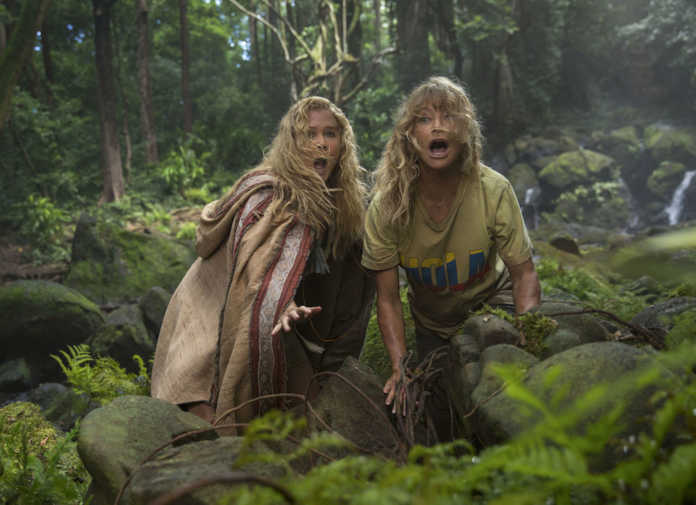 “Snatched” is a dated and utterly predictable comedy that tries to tug at your heartstrings while stuffing in as many corny side characters as possible but, somehow, I liked it.

Directed by Jonathan Levine (“Warm Bodies,” “50/50”) and written by Katie Dippold (“Ghostbusters”), “Snatched” does absolutely nothing new or special — or better than good, for that matter — but it does what a comedy should: make you laugh.

Amy Schumer (“Trainwreck”) is, well, Amy Schumer. The stand-up comic turned movie star doesn’t give a standout performance but she has great comedic range that shines from the very first scene as Emily, who is brash, self-centered and directionless. That’s when she’s at her best in this film and the rest … well, not so much.

Schumer’s rockstar boyfriend breaks up with her days before their lover’s getaway to South America, leaving her searching for a replacement.

Enter Goldie Hawn (“Overboard,” “The First Wives Club”), who absolutely steals the show as Schumer’s lonely and always-worrying mother, Linda. Hawn and Schumer have solid chemistry and their relationship does develop, taking plenty of clichéd steps as the crap starts to hit the fan when they’re kidnapped at the end of the first act of the film.

The supporting characters are what make this film passable but they also send massive jolts through its tone that ultimately hurt it, too. Wanda Sykes, Joan Cusack and Christopher Meloni, who was pure gold in his 10 minutes on screen, make small but punchy comedic appearances that move the film forward in times where it could’ve hit a wall. Ike Barinholtz (“Suicide Squad,” “Neighbors”) as Schumer’s mother-dependent brother Jeffrey also shows off his well-known comedic chops in hilarious back-and-forth phone wars.

All four were great in their own right, but they all felt like they were in a different movie and that’s what held this back from being anything more than OK. The first half of the film is a solid buddy comedy but the latter half turns into a Saturday Night Live comedy sketch with harpoon gun kills and tape-worm wrestling matches that kept me laughing but also jarred me out of the world.

There is nothing outstanding about “Snatched” and that’s not a bad thing. It doesn’t try to shove in too much emotion and the Schumer-Hawn relationship works because of that. The rest of the film is hit and miss.

– “Alien: Covenant” — The crew of a colony ship, bound for a remote planet, discover an uncharted paradise with a threat beyond their imagination, and must attempt a harrowing escape.

– “Diary of a Wimpy Kid: The Long Haul” — A Heffley family road trip to attend Meemaw’s 90th birthday party goes hilariously off course thanks to Greg’s newest scheme to get to a video gaming convention.

– “Everything, Everything” — A teenager who’s lived a sheltered life because she’s allergic to everything, falls for the boy who moves in next door.

– “The Commune” — A story about the clash between personal desires, solidarity and tolerance in a Danish commune in the 1970s.

– “Wakefield” — A man’s nervous breakdown causes him to leave his wife and live in his attic for several months.

By Abel Sanchez, Chair of Parks & Recreation Commission The Aug. 7 deadline has passed and Congress could...
Read more
Opinion