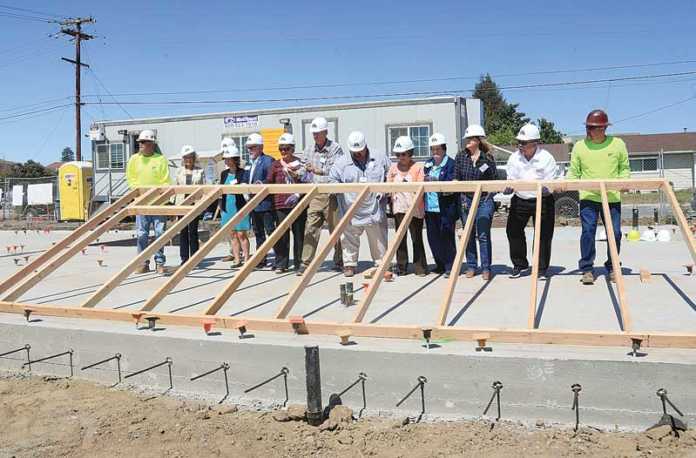 WATSONVILLE — A group of city and county leaders gathered in an Atkinson Lane construction zone Thursday, standing on a foundation for a future apartment complex to raise the first wall.

Although the wall was lowered after standing upright for a few minutes, the ceremonial event was meant to represent the culmination of a years-long process for Pippin Orchards, a 46-unit complex on 56 Atkinson Lane.

The 3.7-acre project, developed by MidPen Housing, consists of 20 apartment units within city limits, while the other 26 are located on unincorporated Santa Cruz County land.

“This is one of those times when you can have one foot in the City of Watsonville and one foot in the county,” said Jan Lindenthal, vice president of real estate development for MidPen.

The City of Watsonville and County of Santa Cruz entered into an agreement where the city provides services such as police and water for the entire project, while the county will process building permits, among other things.

As the project made its way through the approval process, the Local Agency Formation Commission of Santa Cruz County recommended that Watsonville annex the entire property into city limits. But city officials rejected the proposal, citing funding constraints.

Santa Cruz County Supervisor Greg Caput said the project was in the planning stages when he was on the Watsonville City Council about eight years ago.

He added that South County provides about half of the affordable housing units throughout Santa Cruz County.

Expected to open in August 2018, Pippin Orchards will provide three one-bedroom, 29 two-bedroom and 14 three-bedroom apartment homes for individuals and families earning up to 60 percent of Area Median Income. Rental rates range from $559-$735 for a one-bedroom unit to $545-$1,276 for a three-bedroom unit.

Six units will be reserved for individuals with disabilities and their families, who will receive services from the San Andreas Regional Center and Housing Choices.

The project also includes a computer lab, bicycle storage space, a children’s playground, an open courtyard with a barbecue, community planters for gardens and a community room with a kitchen.

Caput called the project an example of “smart growth.”

“It protects ag land, and we are also looking out for the people that work those farms,” he said.