Tarmo Hannula: The San Francisco 49ers just barely edged past the Seattle Seahawks last night in a cliffhanger finale. The 49ers have not beaten the Seahawks in Seattle since 2011. The harrowing closure ultimately came down to a mighty blunt tackle by Dre Greenlaw at the one-yard line with seconds on the clock. The real drama kicked in when San Francisco made the unbelievable choice to punt on the 4th down with four yards to go and just over four minutes left to play. Seattle marched and passed their way up the field to a few yards away from the end zone, enough time to score and then evaporate the final traces of the fourth quarter.

The game turned white hot as SF led, 26-21, and Seattle made several heart-stopping end zone pass attempts, all dashed away by amazing defense. SF held strong and Seattle lost. The game now ends the regular season and SF now heads into the playoffs.

Meanwhile, the Oakland Raiders went down in flames in their last game as an Oakland team Sunday. Receivers flubbed two key passes in the crucial final minutes to spoil one last chance of victory. I don’t know how the Las Vegas Raiders sounds? Maybe they should now be called the Gamblers, or the Las Vegas Vegans.

Tuesday marks the final day of 2019. Though it’s a manmade event, our society still hinges a lot of weight on the flip of the calendar, some feeling it warrants blasting off fireworks, hanging out the front door and banging on pots and pans, blaring the car horn or overdoing it with booze. One of the biggest mistakes are the folks that fire off rounds from their guns into the night sky not considering where those bullets might return to earth. In New York organizers are preparing their traditional 12-foot diameter ball to symbolically drop down a special flagpole starting at 11:59 p.m. Tuesday night. This year it weighs 12,000 pounds, and will feature 32,000 LED lights. The ball dropping was created in 1907 by the New York Times newspaper. It is typically attended by about a million people and viewed on TV around the world.

My friend and pilot Randy Pesce took me for a flight over the Pajaro Valley Saturday. Conditions were excellent so I was able to get a number of valuable photos of ag fields, the Pajaro River, downtown, the coast and a number of big construction projects around town. It always amazes me to see this region from the window of a small plane.

I saw a TV commentary show Sunday where they were dealing with this topic: Post truth society. They covered such things as Kellyanne Conway, Senior White House aide, who used the term, “alternative facts,” whatever that is. They also had a quote in there from President Trump: “Just remember, what you are seeing and what you are reading is not what is happening.” That, of course, makes one ask, “What is happening,” and “according to who?”

Quote of the day: “Once we believe in ourselves, we can risk curiosity, wonder, spontaneous delight, or any experience that reveals the human spirit.” — E. E. Cummings 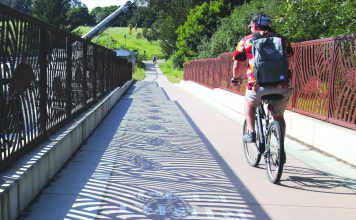