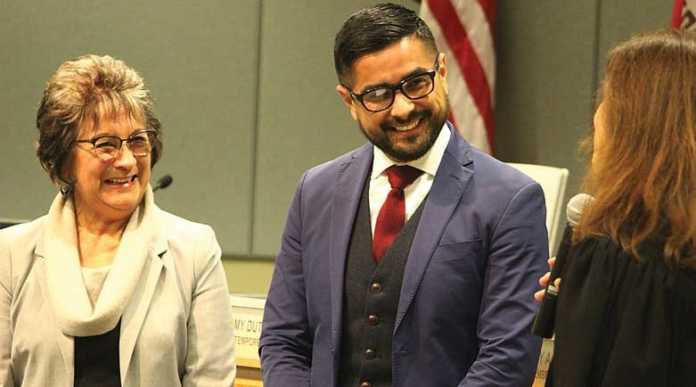 WATSONVILLE — When Francisco “Paco” Estrada told his friends he was running for Watsonville City Council, they first thought he was joking.

Fast forward months later, Estrada is now the mayor of the city where he was born, and leading the council in his first foray in the political realm.

Estrada was sworn in alongside newly-elected and returning councilmembers Rebecca Garcia, Lowell Hurst and Ari Parker Tuesday during the council’s last meeting of 2018.

“This is the greatest honor in my life,” Estrada said. “I’m ready for this and I’m ready to work with my council. I promise I will serve to the best of my ability.”

Estrada, who defeated challenger Jenny Sarmiento in the November election for the District 4 seat, attended local schools, graduated from UC Santa Cruz and earned his master’s degree in modern history from San Jose State University. He currently serves as grants officer for the Pajaro Valley Community Health Trust, and works with the Diabetes Health Center.

Estrada became mayor thanks to 2014’s voter-approved Measure I, which rotates the seat yearly by district.

He said he ran for office as a way to inspire others to be involved in their community.

“To anybody that’s ever wanted to do something positive in the community, or for anyone that’s felt that their voice doesn’t matter, I’m here to tell you that it does matter, and that you can do it,” Estrada said.

He fills the seat left open by Jimmy Dutra, who unsuccessfully ran for Santa Cruz County Supervisor in November.

In his farewell comments, Dutra said he was proud of his accomplishments during his four years on the council, and among those, he cited his work in establishing a park in the Carey-Davis neighborhood and improving Hazelwood Park.

“I had four years of amazing experiences,” he said. “I stood my ground, I never conceded any of my morals or anything that I believe in for political gain. I always did it for the people and I never forgot that.

Parker takes over the District 7 seat from Nancy Bilicich, who termed out after nine years on the council.

A teacher at Bradley Elementary School for the past 23 years, Parker has served on the Santa Cruz County Women’s Commission, Independence Square Board (a disabled and senior housing complex) and the Measure G Revenue Measure Oversight Committee, among other boards.

Bilicich will continue to serve on the Santa Cruz County Flood Control and Water Conservation District Zone 7 board, and said she hopes the city will pursue a fire/paramedic station for the east side of Watsonville, which is a request she has made at nearly every council meeting during her tenure.

“I want to extend my sincerest appreciation for the opportunity to serve the community of Watsonville,” she said. “Throughout my journey on the council, I can’t thank you, all of the people, enough for being there with me.”

Garcia was sworn in as vice mayor as she begins her second term on the council, and said she wants the council to pursue issues such as pedestrian safety, affordable housing and homelessness over the next four years.

Hurst wrapped up his third term as mayor, having previously held the position in 1994 and 2013.

ERIK CHALHOUB - July 1, 2022
WATSONVILLE—Pajaro Valley Arts (PVA) will host a one-day conference on July 9 centered around the figure Our Lady of Guadalupe.  Attendees will explore the historic...