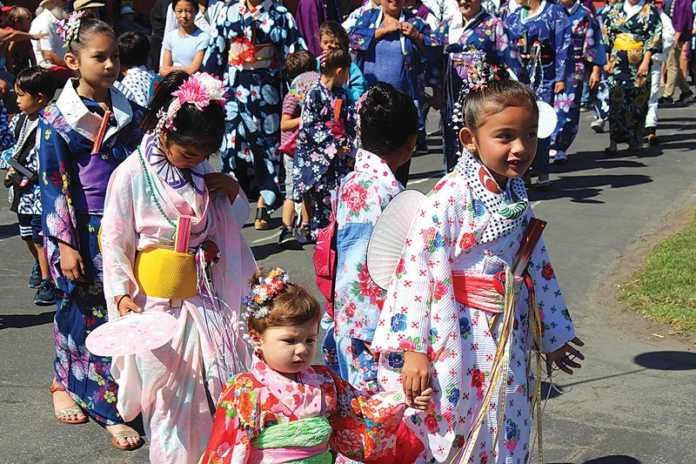 Obon is a Japanese Buddhist custom dating back hundreds of years. It is meant to honor the spirits of one’s ancestors as well as celebrate life. The holiday is observed across the world for three days in late July. Celebrations bring families and friends together for a day of music, food, culture and the main event: dancing.

“It is a time to reflect,” said minister of Watsonville Buddhist Temple, Rev. Jay Shinseki. “To honor our mothers, our fathers, everyone in our past and their sacrifices. But it is also a way to celebrate the here and now.”

Things kick off at noon with a Farmers’ Market. Food vendors selling sushi, udon, noodles, teriyaki chicken, beef skewers and curry rice will be set up inside the main hall. Community groups and other vendors will line the outside courtyard. There will be children’s games and musical entertainment, including a performance by Watsonville Taiko.

“It’s always wonderful to see a community coming together for Obon,” Shinseki said. “It’s a very special time of the year.”

Shinseki said that guests are welcome to come and visit the temple itself, which will be open during a portion of the festival. A raffle drawing is planned, as well as a silent auction.

The traditional dances, also known as Bon Odori, begin at 4 p.m. Dancers of all ages have been practicing for the performance twice a week for the past month. The public is invited to watch the dancing and then, during the grand finale, join in and learn one of the routines.

This is Shinseki’s second year celebrating Obon in Watsonville after he officially became the temple’s minister last year.

“Watsonville is one of the friendliest cities I’ve ever been in,” Shineseki said. “People are so open, and everyone here at the temple works so hard. It’s a wonderful community.”

The Obon Festival is a free event and will be held at the Watsonville Buddhist Temple, 423 Bridge St.