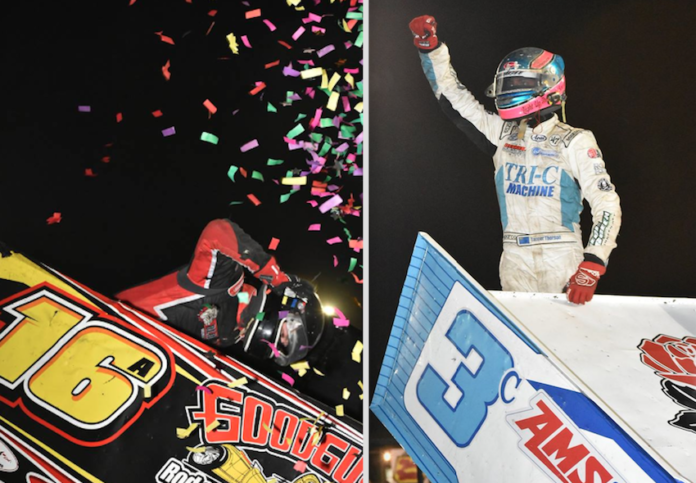 Photo Caption: Colby Copeland (16a) and Tanner Thorson (3c) were happy winners at the 8th Annual Howard Kaeding Classic over the weekend at Ocean Speedway in Watsonville. — Joe Shivak/Contributed

Colby Copeland captured the $5,000 prize with his victory in the eighth annual Howard Kaeding Classic on Saturday night at Ocean Speedway in Watsonville.

Copeland charged into the lead at the start ahead of Chase Johnson and Shane Golobic.

The leaders were in heavy traffic by lap eight, and slight contact between Michael “Buddy” Kofoid and Golobic sent the latter spinning in Turn 2 for a lap-ten caution flag.

Copeland continued to lead on the restart as Kofoid made an inside pass on Johnson for second.

Bud Kaeding dove down on the inside and made the pass on Johnson for third in Turn 1 of the 12th lap. Moments later, contact sent Matthew Dumesny flipping in Turn 4. Copeland continued to lead Kofoid on the restart, but an inside pass on the backstretch on lap 17 gained Kaeding second.

Kaeding chased Copeland the rest of the way, but even a restart with one lap to go was not enough to stop Copeland from winning the 30-lap race.

Sean Watts was the surprise winner of the six-lap Trophy Dash, followed by Copeland.

The remainder of the 22 car main event field was made up by the top finishers of the 15-lap B Main. Justin Sanders won that race, followed by Nathan Rolfe, Kyle Offill, Jeremy Chisum and Bobby McMahon.

Bobby Hogge IV won the 25-lap IMCA Modified Main Event. This was the fourth win of the season for the six-time track champion.

Hogge started back in the fifth row, and when he got to the front of the pack, he had to deal with another past champion, Brian Cass. Hogge was up to the challenge as he won by a few car lengths ahead of Cass.

Peckham started in the third row, but 2015 State champion Fred Ryland made a charge from the fifth row. Ryland gave Peckham all the pressure he could handle, but he was up to the task in scoring a hard-earned win.

This was the first night of the Howard Kaeding Classic, and it was a shootout event between the Civil War and local Taco Bravo Sprint Car Series.

Thorson had to battle with Hirst throughout the night. He scored the victory in the first eight-lap heat race, but Hirst set the fast time standard of 11.467 on the quarter-mile clay oval.

The six-lap Trophy Dash set up the front four rows for the Main Event, and Hirst picked up the win with Thorson in pursuit about a half straightaway behind in second.

The battle continued in the main event, but the tenacious Thorson was able to hold off Hirst down the stretch and grab the victory.

In addition to the Dash win for Hirst and heat win for Thorson, the other three-heat race wins went to King of the West/NARC legend Brent Kaeding, Ocean Speedway point leader Furr and Offill.

Manzella had a second row start for the race and wasted little time getting the lead.

Manzella managed to take the checkered flag with Fred Ryland and Austin Williams in close pursuit.

Frost, Williams and Manzella picked up eight-lap heat race wins as there were 19 competitors on hand.

This was his second win of the season as the third ranked driver keeps his championship hopes alive.

Rob Gallaher and Elrod won eight-lap heat races, but Gallaher fell out of the Main Event on the 13th lap.

The closest finish of the night occurred in the South Bay Dwarf Car 20 lap Main Event.

In a battle of the champions, two-time champ Terre Rothweiler won a photo finish ahead of the reigning champion, Cameron Diatte.

Price and Chandler each scored wins in their respective eight lap heat races.

DON MARTIN II, Contributed to the R-P - September 20, 2021
Two years ago Amy Thomas, principal at Watsonville Charter School of the Arts, noticed that her students were getting a bit restless during and...