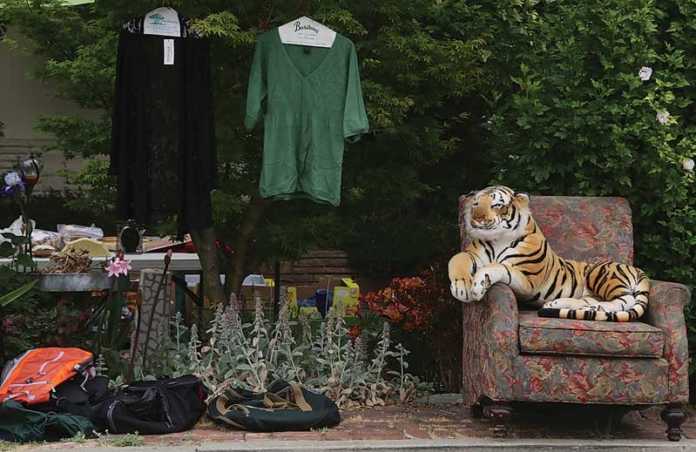 On My Mind, Aug. 3: A neighborhood comes to life

(A stuffed toy tiger keeps a wary eye over a yard sale in Santa Cruz. Photo by Tarmo Hannula/Pajaronian)

My neighbor, Jan, and her son Tyler had a yard sale Saturday.

Since they ran an ad in the paper and put up a bunch of signs, it was heavily attended. Being right outside our living room window, my wife Sarah and I saw the comings and goings over the day. It was warm enough to leave our front door wide open so we could hear all the different voices and various sounds fill the day.

It was incredible to us how many people showed up, some leaving with a few books, a backpack or a couple shirts. We saw the dealers rush through, the folks that hit yard sales and the flea market regularly. Several families stopped by. We watched as some young kids who were tickled to come away with stuffed animals.

Sarah and I were amused at the way Jan and Tyler had placed a large stuffed toy tiger in a chair with its paws draped over the armrest right at the curb. It begged to be photographed because it looked surreal — a large Bengal tiger keeping a wary eye on things.

Eventually a man bought the tiger and stuffed it in his van. That’s when I heard Jan remark, “Oh darn it! I meant to take a photo.” Fortunately I had already done it.

One of the main goals of the sale was to clear out a bunch of Jan’s husband’s belongings. Brian — who was 71 — died on June 1. He had been battling cancer he got from exposure to Agent Orange while he was serving in the Vietnam War. The final curtain call was the two strokes he suffered.

Brian was a great neighbor, gentle in spirit, funny, and a good listener. He was always willing to keep an eye on our house when we travelled, and Sarah and I had Brian and his family over for dinner numerous times and they’ve had us over as well.

Brian worked in Watsonville as a geotechnical engineer at Pacific Crest Engineering on Airport Boulevard and he helped us here at the R-P with at least one article about a major levee repair job he was tangled up with.

Since our living room windows stare straight across the street at Jan and Brian’s home, we routinely spotted Brian heading off to work, taking his evening walks or hauling out the trash, yard waste and recycle bins. For the past 12 years he was a regular fixture in our lives and in the fabric of the neighborhood. And now he’s gone. It’s weird because we can definitely feel his absence, like a chapter torn out of a good book.

Jan and Tyler seem to be handling the situation pretty well. It’s not, however, the first time their family has had a bomb go off on their front lawn. Back in 2011 Brian staggered up our front walkway to tell us their youngest son, Caleb, had died of a drug overdose. Naturally, it was devastating for their family. We knew Caleb. He was a good kid. He was smart and meant well. It was obvious he was dealing with some big issues and I guess they eventually caught up with him. His passing dealt a tremendous blow to our picture of the neighborhood.

But it’s been said that life goes on, and both Sarah and I are amazed at how well Jan and Tyler keep moving forward with their half of the family. Their yard sale was full of life and people really seemed to relish Jan and Tyler’s positive spirits. We heard several explosions of laughter come from across the street. I even got into the act and tossed my old “beater” electric guitar onto the heap. A neighbor bought it within the hour for $30. I ended up with several of Brian’s shirts and two of his backpacks.

At the end of the day Sarah and I helped pack up the yard sale. I loaded a bunch of things in my trunk, bound for Goodwill in Watsonville.

On Sunday the street was quiet again, save for a small heap of things that stood beneath a “FREE” sign in Jan’s yard — a few hoses, a ladder, a couple backpacks. Eventually everything was gone.

And I’m sure somewhere that stuffed tiger is in another happy home.

In a way it was like a whirlwind farewell for our friend Brian. We saw some of his things head off in a new direction, given a second life. We heard people sharing stories and thoughts about him and the neighborhood. It sure painted a great picture.

On Tuesday, Brian would have been 72, so as evening fell we crowded around the fire pit with Jan and Tyler in their front yard along with their friend Shelly to enjoy dessert, a roaring fire and each other’s company. Sarah later mentioned how lucky we truly are to be able to have a network of friends all around us in our neighborhood.