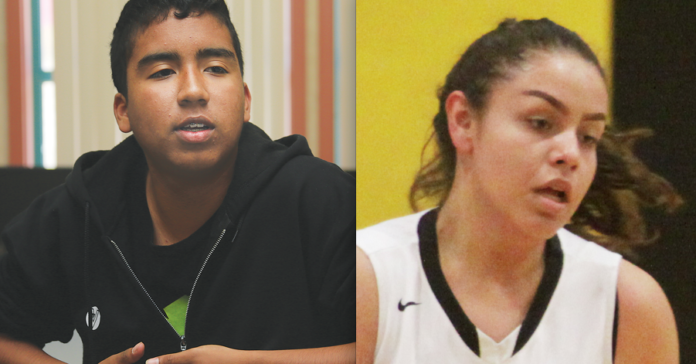 Castro-Alvarez and Vargas beat out dozens of applicants from Santa Cruz County high schools to earn the scholarship, which is dedicated to the late Wayne Richards, a former teacher and coach at San Lorenzo Valley High that focused on life lessons and balance while roaming the sidelines and dugout.

Neither Castro-Alvarez nor Vargas knew that they had won the top honor until the ceremony.

“It was a shock for the both of us,” Castro-Alvarez said of the honor. “A good shock.”

Watsonville’s star pitcher Jessica Rodriguez also walked away with an honor, being named the county’s Pitcher of the Year after guiding the Wildcatz’s softball program to its first-ever Central Coast Section title.

To be considered for the scholarship applicants must be graduating seniors, maintain a 3.5 cumulative GPA, submit two letters of recommendation and write an essay explaining how athletics have impacted their life.

Applicants also had to showcase their impact in their communities.

Castro-Alvarez said athletics helped her become more vocal and mature. She participated in both basketball and track and field over her four years at Watsonville, qualifying for the CCS track meet in the discus during the 2016 season.

She said her parents, Cecilia and Emiliano, never pushed her to play sports but they encouraged her to continue playing as long as she kept her grades up.

“That’s really what they cared about,” said Castro-Alvarez, who finished with a 4.1 cumulative GPA.

Castro-Alvarez will attend UCLA in the fall and major in business economics. She said she has dreams of working in an NBA front office.

Vargas, meanwhile, will attend UC Berkley in the fall for a pre-med major. He said he has hopes of becoming a doctor specializing in cardiology and returning to Watsonville to help people in his community.

“This community has been very supportive,” Vargas told this newspaper in an earlier interview. “We appreciate that, and we’re going to come back and do the same.”

Vargas was Watsonville’s co-salutatorian and starred for the school’s soccer team, pushing the Wildcatz to their 11th CCS title last year. He also played four years of volleyball and helped the program to its second-ever league title. An injury kept him off the volleyball court and soccer pitch this year.

Lee and Bockman were standouts in the pool for Aptos.

Lee powered the girl’s water polo team for the past four seasons and led the Mariners in goals (50) and assists (29) this season.

Bockman continued her dominance for the girl’s swim team in her fourth varsity season, winning league championships in the four events and directing the Mariners to their seventh straight team title.

Rodriguez had one of the best softball seasons in the county’s history. The sophomore led the section in strikeouts (253) and wins (22), while holding the fourth lowest earned run average (0.80). The Pitcher of the Year honor does not come with a scholarship.