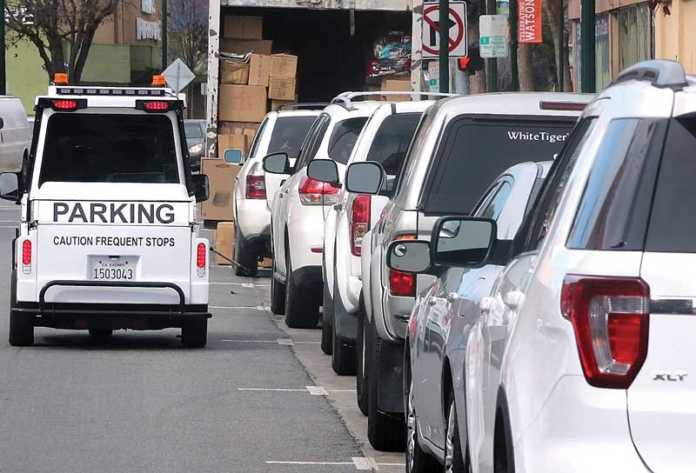 Editor’s note: This is the next installment in a series of articles focusing on downtown Watsonville.

WATSONVILLE — With more than 3,100 parking spots available in downtown Watsonville, finding a place to park isn’t the problem, according to a report. Rather, it’s the city’s management of them that needs improvement.

The Watsonville City Council heard the results of a more than year-long study by a city-commissioned consultant focused on parking in the downtown area. The council voted 6-1 on Tuesday to accept the report and move forward with implementing its recommendations, with Councilwoman Nancy Bilicich dissenting.

In September 2016, the council entered into a $65,000 contract with San Francisco-based Nelson/Nygaard Consulting to create a new parking study, which was last completed in 2003.

According to the study, which examined 15 lots and a variety of curbside parking spots throughout the downtown area, close to half of the spots were full during different days and times throughout the year.

Patrick Siegman, principal of Nelson/Nygaard, said downtown has a “perceived” parking shortage, as curb spots closest to businesses are often full, yet the city’s two parking garages have a “large surplus” at the same time.

“We can’t solve the perceived parking shortage by building more spaces,” he said.

The study concluded that downtown can accommodate “substantial development,” Siegman said, but the city needs to improve how it manages its parking lots.

“Downtown has a parking management problem, not a parking supply problem,” he said.

As such, the city needs to work on redirecting drivers to parking garages, such as installing clear signage showing where the public lots are, according to the report. Parking meters could also be installed on what Siegman calls “hot spots,” such as around Watsonville Plaza, where parking is typically full. Doing so would make people move to “slightly less convenient spots” such as the garages, according to Siegman.

But the city’s downtown parking district is insufficiently funded, the report found, operating at a $100,000 deficit annually, making it difficult to fund maintenance of the parking lots.

Assistant City Manager Matt Huffaker said the city is falling short when it comes to maintaining its garages and lots due to funding constraints.

“We hear that often from complaints by our downtown businesses that our garages are not properly maintained,” he said. “It’s easy to take a quick trip to one of our garages to see that. That’s true of our lots as well.”

Siegman suggested the city could charge 50 cents to a dollar an hour at the parking meters, with that revenue going to the parking district to fund downtown maintenance projects.

A number of private parking lots sit “underutilized,” the report stated, as some have signs warning visitors that they will be towed if they park there and visit another destination. The report suggested parking could be made more efficient if the city negotiated with land owners to open those lots to shared use.

Downtown parking spots also have inconsistent time limits throughout the area, which can be confusing to motorists, the report suggested.

Bilicich said visitors to downtown want to park close to businesses, and not farther away in parking garages. Installing meters, she added, would “hinder downtown.”

“We are still a long way from charging for parking to come downtown, ‘for what?’ is what I hear,” she said. “What is downtown? Once we put meters, I think we will end up with more people going to shopping centers and saying, ‘forget downtown.”

Councilman Oscar Rios said visitors tend to avoid parking garages because they are concerned about safety, and also because they don’t want to walk to their destination.

The council directed city staff to come up with an ordinance based on the recommendations of the study, which will be up for approval at a future meeting.