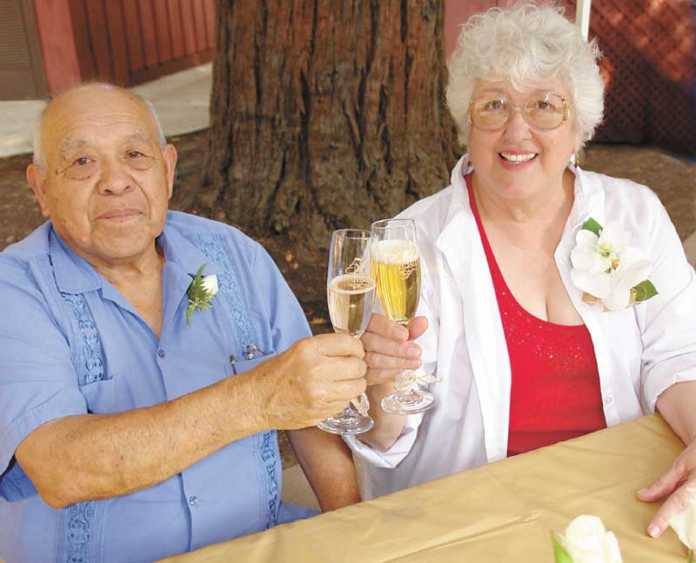 WATSONVILLE — Patricia Gospodnetich Solano, a lifelong Watsonville resident who raised five children and variously worked as a teacher, a telephone operator and a legal secretary, died Monday after an illness. She was 78.

Her daughter GeriAnne Solano-Simmons described Solano as a significant part of the community, and said that her family has heard from numerous people since the news broke of her mother’s death.

Simmons said that Solano had been sick for a long time, and was in the hospital six times over the past half-year. Her death came just eight days after being handed a diagnosis of chronic myelomonocytic leukemia.

In a Facebook post, former Watsonville Police Chief Manny Solano said that his mother died in the arms of her husband of 58 years, Alex Solano.

Pat Solano was under Hospice care, and died without pain and with the help of little pain medication, Simmons said.

“She had such strength,” she said. “Right to the end she was peaceful.”

Solano’s family held a private ceremony for family on Wednesday. A celebration of life is scheduled for June 30, which would have been her 79th birthday.

“She didn’t want people to cry, she wanted people to celebrate,” Simmons said.

Solano was born and raised in Watsonville. Her parents came from Austria and Yugoslavia through Ellis Island to Watsonville to work in the apple industry.

She grew up on Maple Street and attended Moreland Notre Dame when it was an all-girls school. It was an era in which nobody locked their doors, the milkman made daily rounds and residents carted blocks of ice home to keep their food fresh.

It was also a time when most services were located within walking distance.

“Mom didn’t drive until she was 36 years old,” Simmons said.

Solano worked as a special education aide at Hall District Elementary School, a night operator at Pacific Bell and a legal secretary at the Wyckoff Law Firm.

Chronic fatigue from another illness forced her to retire early from that position, and so she stayed home and wrote romance novels.

She served on the Parent-Teacher Association and was a member of the Corralitos Woman’s Club and the Watsonville Woman’s Club.

She was also known as an excellent storyteller, a skill she learned from her grandmother, Simmons said.

“She was selfless,” Simmons said. “She thought of others before herself. She loved her community and she loved this town. I hope people remember her and think of her always.”

In addition to her five children, Solano had 14 grandchildren and one great-grandchild. A second is on the way, Simmons said.

Zarko Radich, who owns Jack’s Cigar Store, said he considered Solano a great friend.
“Pat was one of those people who, when you met her, you knew you found a friend,” he said. “She is going to be missed by a lot of people.”

In addition to her native English, Solano spoke Spanish and Croatian, Simmons said.
Zarko Radich’s wife Nevenka Radich said Solano was a student in her Croatian class in 1976.

“Since then we became great friends,” she said.

That class was the catalyst for the founding of the Yugoslav-American Cultural Organization, which later became the Slavic-American Cultural Association (SACO).
When that organization faltered due to declining membership, Solano was instrumental in reviving it through a letter-writing campaign, Radich said.

“She was a bright lady, a beautiful lady with a smile always and kind words always,” Radich said.

Radich said she last saw her friend on Friday. The two said goodbye, thinking they would see each other soon.

“I will miss her greatly, and I thank her for all her kindness,” she said. “I learned from her a tremendous amount.”

Manny Solano described his mother as a great teacher and “consummate communicator and storyteller” who was deeply proud of her Slavic heritage.

“She loved spending time at the kitchen table, sharing stories and helping others learn about Pajaro Valley history,” Solano said.

Solano said his mother often helped him with his homework, an effort that kicked into high gear when a teacher told her his writing was “atrocious” and that he should seek a career that did not involve writing.

“She had me practice over and over again until it eventually improved,” he said. “I later thanked her when I learned police work would involve 80 percent report writing.”

Pat Solano’s husband Alex Solano said the two knew each other because their mothers worked together in the fish cannery industry.

“She had a boyfriend,” he said.

That changed when Alex Solano came home from Europe where he was serving in the U.S. Air Force.

When the couple began to have trouble, Alex Solano was there for her.

Solano remembered his wife as a woman who loved her community, with such a knowledge of local history that people researching their family trees often turned to her for help.

She was also kind and caring, and a good listener, and would send cards to sick friends and offer counsel to people in distress, Solano said.

“She was a very strong woman,” he said.

The community is invited to a celebration of life for Pat Solano. The event is scheduled for June 30 from 11 a.m. until 3 p.m. at the Corralitos Community Center at 35 Browns Valley Road.