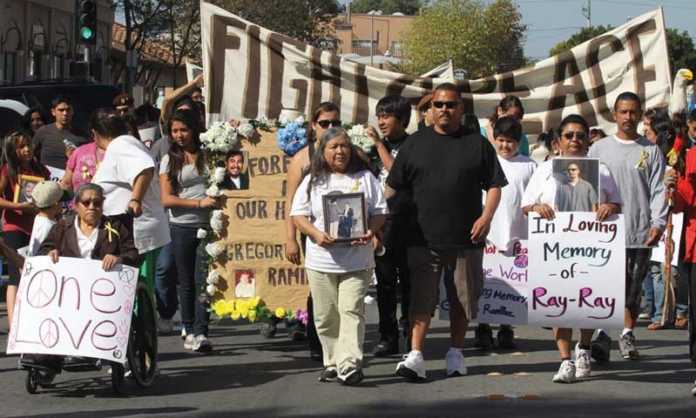 WATSONVILLE — The public is encouraged to participate in the 24th annual Peace & Unity March Sunday at Watsonville City Plaza.

The event, first held in 1994, intends to speak out against violence in South Santa Cruz County.

Attendees are asked to gather around 11 a.m. on Sunday and bring photos and other offerings to honor loved ones who were victims of violence. Various individuals, including seven local mothers who lost their children to violence, will be guest speakers. Local musician Uriel Mendoza will also perform.

Around 2:30 p.m., the march will begin, winding around the perimeter of the plaza.

“We’re trying to change lives,” said Marilu Alejo, who organized this year’s event along with Alan Hicks. “We want to help end this cycle of violence that has affected so many.”

A little over two weeks ago, Alejo said she found out that for whatever reason, possibly a lack of funding, this year’s march might not happen. She took it upon herself to organize and find money to put on the event, reaching out to community partners and organizations throughout Santa Cruz County.

Pajaro Valley Prevention and Student Assistance, the Watsonville Brown Berets, Revolunas, Community Action Board of Santa Cruz County and many other groups have combined their efforts to sponsor this year’s march.

“We really needed to have this,” Alejo said. “It’s so important, not only for paying respects to the victim’s families but also for our city’s future.”

For information on the march or to make a donation, contact Alejo at 800-6496.