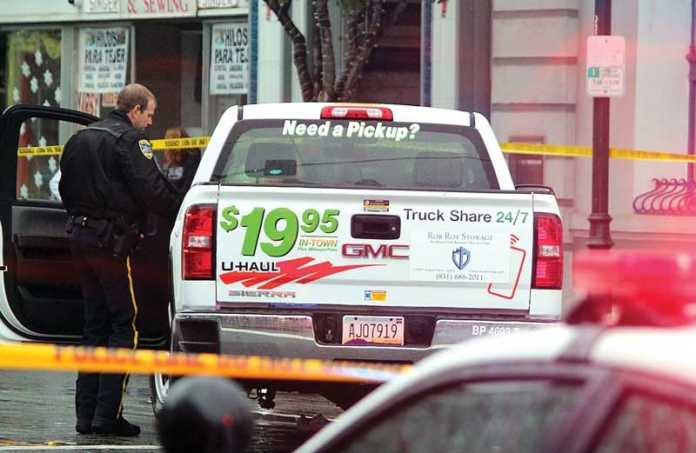 WATSONVILLE — A woman died after she was struck by a pickup as she was crossing Main Street Monday afternoon.

The 61-year-old woman, who has not yet been identified, was crossing Main Street at East Beach Street at about 3 p.m. when she was struck by a GMC U-Haul pickup truck turning north on Main in rainy conditions.

Watsonville Police spokeswoman Michelle Pulido said the woman was taken to a hospital, where she later died.

The driver of the truck, a 33-year-old woman, is cooperating with officers, Pulido said, and alcohol or drugs are not believed to be a factor in the crash.

No more information is available as the investigation continues, according to Pulido.

“We’d like to express our sincere condolences to the family and friends of the 61-year-old woman who passed away on Christmas Eve,” she said.

Main Street at East Beach Street was shut down in both directions for several hours during the investigation.

The crash marks another incident in a growing issue on Watsonville’s roadways.

On Nov. 4, an 89-year-old man died after a car struck him as he crossed Airport Boulevard.

A couple of weeks later, a woman was hit by a car as she crossed Freedom Boulevard at Clifford Avenue, reportedly not using a crosswalk.

Earlier in the year, on April 4, a woman was seriously injured after being struck by a car at the intersection of Airport Boulevard and Holm Road. The driver was reportedly distracted by his cell phone.

Pulido said officers are working “tirelessly” to prevent these incidents through education, outreach and enforcement.

In October, the police department received a $35,000 grant from the California Office of Traffic Safety to fund a bicycle and pedestrian safety education program.

The year-long program includes a variety of educational activities, such as classroom presentations and community events aimed at teaching youth and adults about traffic rules, rights and responsibilities.

“This is an issue that impacts the entire community, and in order to curb the problem, we need everyone’s help,” she said.

Pulido offered the following tips for both drivers and pedestrians:

• Drivers need to pay attention at all times, avoid distractions such as cell phones, slow down and wait an extra few seconds before going through an intersection.

• Pedestrians should always make eye contact with drivers before crossing the street, use marked crosswalks and make themselves visible by wearing bright clothing during the day and reflective materials at night.

“This is not an issue we can solve on our own,” she said. “We all need to come together and work as a team to ensure everyone’s safety and keep these accidents from happening.”