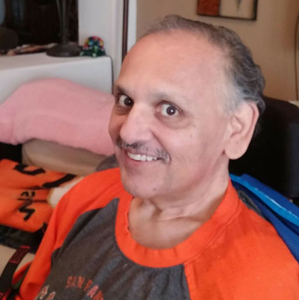 My love was released from his paralyzed body and went to heaven on September 1, 2017. Philip was born in Watsonville, California on November 5, 1956.
He is preceded in death by his parents Luis and Rose Vargas Albo, his sister Lou Ellen Albo Carlon and sister-in-law Katherine Albo. Philip is survived by his wife of 22 years Rhonda Cotter Albo; his brothers Luis, Ron (Dora), Gary; his sister Dawn Ware (Doug); his many nieces and nephews and many friends.
Philip graduated from Watsonville High School in 1975 and he was a credentialed teacher with the State of California, Pajaro Valley Joint Unified School District in Santa Cruz County. Philip was paralyzed 2 years ago 3 days after knee replacement surgery. The doctors said his discs moved into his spinal cord. Prior to his paralysis Philip was employed by Horizon USA in Reno, Nevada as their Customer Service Manager. Philip was an amazing home chef and had a zest for life and travel.
Philip’s funeral will be at 10 a.m. on October 7, 2017 at Holy Cross Catholic Church, 565 Vista Boulevard in Sparks, Nevada. His celebration of life will follow immediately after at La Fuente Mexican Restaurant, 790 Baring Boulevard, Sparks, Nevada. In lieu of flowers please make donations in Philip’s name to Nevada Humane Society, 2825 Longley Lane, Reno, NV 89502.