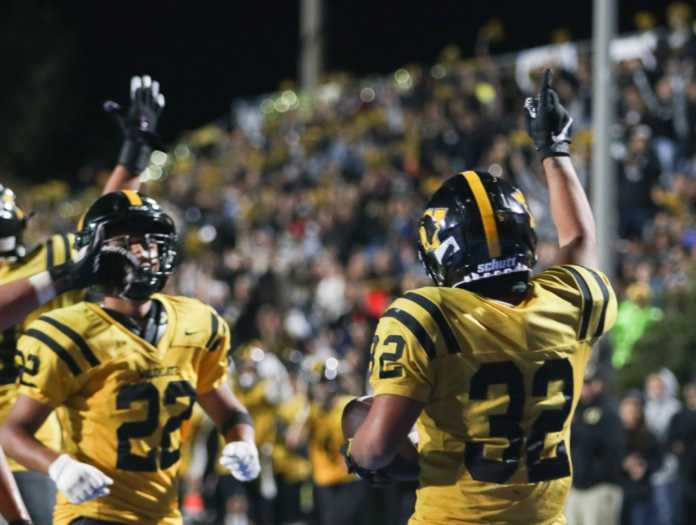 1. APTOS (0-1): The Mariners lost a close battle at home against Newport Harbor of the Sunset League in the CIF Southern Section but remain at the top of this week’s PV Sports Power Poll.

The Sailors (2-0) were ranked No. 161 in the state by MaxPreps, and if anyone can bounce back it’s the Mariners, who had not lost a season opener in six years.

But they will be tested against a tough Oakdale team that has qualified for the Sac-Joaquin Section playoffs in 14 of the past 15 seasons.

Watsonville senior Blake Mares and the rest of the running backs managed to pick up yards effectively down the stretch behind an offensive line that struggled at the start of the game.

The Wildcatz’s defense was solid despite giving up two big pass plays, including one that set the Grizzlies up for a touchdown just before halftime.

3. M.V.C. (0-0): Monte Vista Christian didn’t get a chance to play against Ann Sobrato, which was its only home game of the season. Still, the Mustangs looked pretty impressive during the Apple City Jamboree and senior quarterback Nathan Renggli is set to have a breakout season.

Renggli has an arsenal of weapons including running back Quinn Alexander and receiver Andrew Montoya.

4. N.M.C. (1-0): North Monterey County senior Brandon Ducusin got the Condors off to a great start after leading them to a win that went down to the wire.

The Condors will face a Monte Vista Christian team that’s been hungry to play after its game last week was canceled.

5. PAJARO VALLEY (0-1): The Grizzlies had a good game against crosstown rival Watsonville, especially on the defensive side. It’s a good sign for Pajaro Valley coach Kevin Cordova and the rest of the coaching staff.

The front seven did an excellent job of stopping the Wildcatz’s ground game for most of the game and forced a turnover, which resulted in points on the ensuing drive for the Grizzlies.

The offense does need some work, especially on the offensive line but a few minor tweaks in practice should have them well prepared for Soquel.

6. ST. FRANCIS (0-1): The Sharks had a rough start in their season opener against King City. Still, St. Francis coach John Ausman liked the way the team battled and hung in there with the Mustangs for most of the game.

However, it’s going to be even tougher for the Sharks to just hang around in a game with a small roster that includes just 12 players ready to suit up on game day.

The Sharks will hit the road for the first time this season in a non-league game against Yerba Buena in San Jose.

Editor’s Note: This article will be published in the Sept. 6 edition of The Pajaronian.