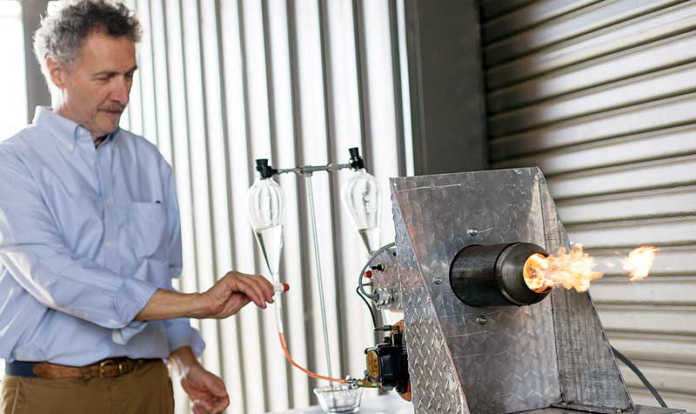 WATSONVILLE — The Pajaro Valley Unified School District Board of Trustees on Wednesday approved a pilot program to use locally produced, clean-burning fuel in two of its vehicles. If the month-long test is successful, the district will consider using the fuel in all its busses and trucks.

The trustees also approved the purchase of a software package expected to streamline the bus system.

Under the pilot, the district would purchase 110 gallons of bioethanol fuel from Watsonville-based Blume Distillation at about $2.65 per gallon.

The pilot would start with two older vehicles to minimize possible damages. The busses would not need special modifications.

The fuel from Blume Distillation is made from crop waste and other by-products which the agricultural industry considers waste. This includes apple pulp, almond hulls and artichoke leaves.

Such a process is perfect for agricultural areas such as Watsonville, which has a year-round abundance of such waste products, founder David Blume said.

“Businesses are starting to look at ways to effectively use their waste,” Blume said.

The conversion could therefore be a win for an industry that must otherwise find ways to dispose of its waste, he said.

It could also be a boon for school districts, businesses and commuters looking for cleaner, lower-cost alternatives to petroleum-based fuels, Blume said.

At the same time, using the fuel could help save money at a time when state regulators are requiring expensive emissions control systems on diesel vehicles, said vice president Tom Harvey.

“It will be a huge savings for the school district,” Blume said.

Better still, because the company’s ethanol produces only carbon dioxide and water when burned, it is safer for children to be around idling busses, according to Blume.

That is compared to diesel fuel, which produces several toxic and greenhouse gasses when burned, Blume said.

“We think all around this is a genuinely winning proposal,” he said.

Blume said he hopes a successful test with PVUSD could be the beginning of an effort to expand operations to include, among other things, a production plant and a station in Watsonville, where anyone can fill up their vehicle.

The company also hopes one day to establish a “fuel corridor” from Watsonville to Richmond, Harvey said.

PVUSD would be the first school district to use Blume’s products, but the company is talking to Watsonville city officials about a similar program.

The company is also in talks with the cities of Richmond, Oakland and San Diego. Chinese officials have also visited Blume’s headquarters on Calabasas Road, in hopes of using the company’s technology to improve air quality in that country, Blume said.

Thousands of school districts in Brazil already use it, as does Sweden, he added.

PVUSD Transportation Director Kathryn Powell said she was impressed with the company, and said the district will consider switching over to bioethanol if the test is successful.

At the end of the test period, district maintenance staff will closely examine the vehicles to see how the fuel affected them. They will also gauge whether the company’s purported low-emission claims are accurate.

“If it is genuinely a cheaper, safer alternative, we would absolutely switch over,” she said.

In other action, the trustees agreed to purchase Transfinder, a new software package that will help district officials better manage its bus fleet.

The system would cost $70,060 for purchase and implementation during the first year, and $19,700 each year following for service, support and software hosting services. The cost of the program is expected be offset, as staff time to process these requests will be reduced.

Currently, teachers request busses for field trips on paper forms, which frequently get lost in the shuffle, leaving classes without their transportation, Powell said.

“It became a very cumbersome process for school sites and the district,” she said. “This program will allow for email notifications and automated approvals.”

The system will also allow the district to better organize its bus routes, Powell said.

“As a result of trimming our bus routes, we have kids that have to be in their seats at 7:45 a.m.,” she said. “All kids should have access to busses.”

Powell said she expects the Transfinder program to be implemented during the upcoming Christmas break, to give time for training.