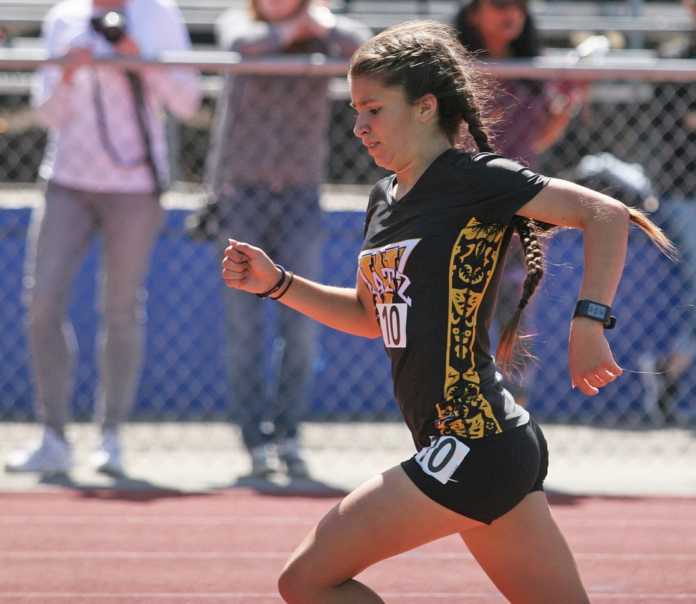 1. Layla Ruiz, freshman, Watsonville: An unknown commodity at the beginning of the school year, Ruiz left a big impression on the Central Coast Section by the end it. In cross country during the fall, Ruiz won the Monterey Bay League-Pacific division championship, placed third in the CCS Division I race and joined teammate Daniela Salazar as the first female cross country runners from Watsonville to advance to CIF state meet since 2000. She closed out her freshman season by winning league titles in the 1,600- and 3,200-meters, while also playing a big part in the team’s first league title since 1990. She was named the top freshman cross country runner in Northern California, and also finished seventh in the 3,200 at CCS with a school record time of 11 minutes, 9.4 seconds.

2. Juliana Wilson, junior, Watsonville: Wilson put together arguably the best offensive softball season in program history. Among players from the CCS, the UCF-commit finished fifth in batting average (.646) and doubles (13),  fourth in hits (51), third in homers (11) and second in RBIs (49) and slugging percentage (1.303). She also recorded at least one hit in all 27 games and did not strike out once. Behind her brilliance, Watsonville won a share of the MBL-Gabilan division title and advanced to the CCS Open Division semifinals.

3. Daniela Salazar, senior, Watsonville: Salazar followed up her terrific junior sports season with an even better final year. In cross country during the fall, Salazar finished second in the MBL-Pacific division championships and also took 10th in the CCS D-I race to qualify for the CIF State Meet. During track in the spring, she won her fourth straight league championship in the 800, helped Watsonville win its first team league title since ‘90 and also placed fifth at CCS in the 800 with a school record time of 2:14.85.

4. Jessica Rodriguez, junior, Watsonville: Rodriguez was named the best pitcher in the MBL-Gabilan division for the second consecutive year after leading Watsonville to a share of the league title. She finished with the 14th lowest earned run average in the state (0.58) over 133 innings pitched. That number was also second best in the CCS. The UNLV-commit also had the fifth-most strikeouts (185) and second-most wins (20) in the section.

5. Monserrat Hernandez Marquez, senior, Aptos: Hernandez Marquez completed her four-year soccer career the way she started it: as a league champion. She not only led Aptos to its fifth straight SCCAL championship, but the flashy midfielder also paced the Mariners in goals (17) and assists (6) for the third straight season. She finished her career with 50 goals and 22 assists, and was named the SCCAL’s Most Valuable Player for the second consecutive season.

6. Natalia Ackerman, sophomore, Aptos: Ackerman had a breakout sophomore campaign on the basketball court and in the high jump. As the starting center for the basketball team, she averaged team highs in points (15.8), steals (2.9) and blocks (2.9) for the SCCAL champions and CCS D-III finalists. In the spring, Ackerman won an SCCAL championship in the high jump and also finished seventh in the event at the CCS Championships.

7. Savanah Quintana, senior, Watsonville: The Wildcatz’s two-sport star helped the basketball team halt a lengthy playoff drought in the winter and kept the softball team’s success going in the spring. Quintana, a four-year varsity starter in both sports, guided the basketball team to its first CCS playoff win since 2008, while leading the team in points (14), assists (3.1) and steals (3.8) per game. In the spring, Quintana was again a sure glove at shortstop for the MBL-Gabilan division co-champions. She earned all-league first team honors in both sports.

8. Hannah Hocom, junior, Aptos: Hocom was one of the deadliest shooters in the state while leading the Mariners to their first SCCAL basketball title since 2001. She finished with the 14th-most 3-pointers in the state (84) and also had the fifth best 3-point shooting percentage (37 percent) in the CCS. Named the SCCAL’s Most Valuable Player, Hocom guided Aptos back to the CCS D-III championship game and the quarterfinal round of the CIF NorCal tournament.

9. Abbi Saxton, senior, Aptos: Saxton was the steadying leader for the Mariners in the fall and in the winter. On the volleyball team, she quickly turned into one of the Mariners’ most reliable middle blockers during their run to an SCCAL championship and a CCS D-III finals appearance. As a fourth year starter on the basketball team, Saxton helped Aptos run the table in the SCCAL and reach the CCS D-III championship game for the second straight season, while averaging 5.3 points, 10.4 rebounds, 3.7 assists and 2.3 steals per game.

10. Samantha Bellucci, senior, St. Francis: Bellucci was a star on the volleyball court in the fall, part of a record-setting soccer team in the winter and broke records on the track in the spring. The volleyball team’s stable second option on offense, Bellucci helped the Sharks win their first CCS playoff game since 2009. She also played defense for the soccer team, which set the program record for wins in a single season (9), and broke the school record in the high jump and 4×100 relay.