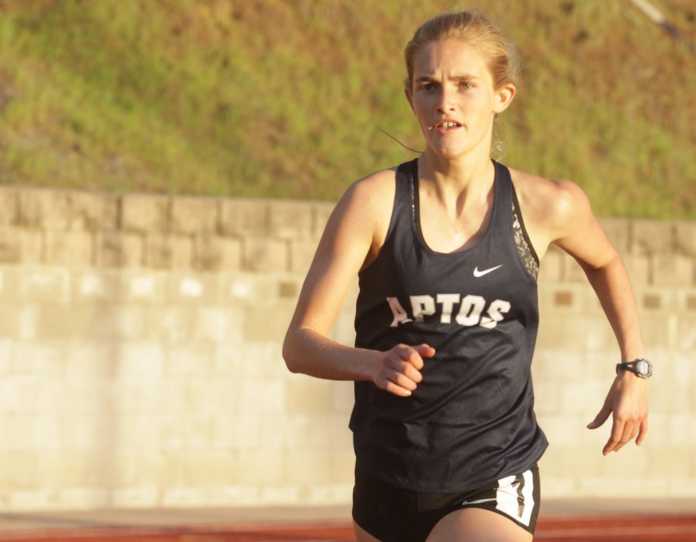 R-P Female Student-Athlete of the Year, 2017-18: Zlatunich ran to greatness in final year

APTOS — Marea Zlatunich could have had a very different high school experience.

Now a league, section and state champion runner for the Aptos High Mariners, Zlatunich didn’t show up to the first day of cross country practice during her freshman year.

“I honestly didn’t want to do cross country,” Zlatunich said. “I did it as an eighth grader and I wanted to quit after the first day, but my family didn’t let me.”

But when her friend, Annika Niles, begged her to come out for the second day of practice because “she didn’t have any friends on the team,” Zlatunich reluctantly obliged.

It turned out to be one of the best decisions of her young life.

Over the last four school years, Zlatunich kept the Mariners’ cross country team on top of the Santa Cruz Coast Athletic League and Central Coast Section, while also bringing it back to the top of the mountain at the state level. And on the track, she helped Aptos regain control of the SCCAL and followed in the footsteps of the team’s former stars at CCS.

“I never ever thought I could accomplish everything I did,” Zlatunich said. “It is a bit crazy thinking back to it.”

Now, the Pajaronian is adding another accomplishment to her lengthy list, naming her our Female Student-Athlete of the Year for the 2017-18 school year.

In the fall, the future Cal Golden Bear helped Aptos win its sixth straight SCCAL title and seventh straight CCS Division III crown. She also earned a spot on the podium as an individual at the CIF state meet for the third consecutive season. She placed sixth in the D-III race after taking fourth in 2016 and 2015, which was also the year she powered the Mariners to their second state title.

She closed out her final season at Aptos with a strong track season in the spring. Along with playing a big part in the Mariners’ first league title win since 2014, Zlatunich exorcised her demons at the CCS Championships by winning an individual title in the 1,600-meters.

It was a crowning achievement for Zlatunich, who missed the league and section meets a year prior because of a non-running knee injury

“It was almost a perfect end to my senior season,” said Zlatunich, who sat out the state track meet after suffering a knee injury from a surfing accident. “The feeling of winning that title, it was amazing. I was on top of the world…I wish I could’ve competed at state, but it doesn’t take away from everything else. I’m a CCS champion in the mile. That’s something to be proud of. Nobody can every take that away from me.”

Zlatunich said the disappointment of not repeating as the CCS D-III cross country individual champion in the fall fueled her powerful spring. A new mental mindset based on a Gandhi quote supplied by coach Dan Gruber also helped.

“I will not let anyone walk through my mind with their dirty feet. I had to really believe in it,” Zlatunich said. “I feel like I let people intimidate me a lot in the past. I struggled with my confidence but every time I stepped out on the track this season I felt good… At CCS, I felt really good. I felt like I belonged.”