NAPA — After a promising first season in the NFL, Oakland Raiders receiver Seth Roberts stalled a bit in year two as he was plagued by inconsistent play and dropped passes.

There might have been a reason for that as Roberts played through the 2016 season with a double sports hernia injury suffered in training camp and never revealed by the team.

Roberts played all 16 games with the injury and never appeared on the injury report but that doesn’t mean he wasn’t hampered by it. After catching 32 passes his first season as a bit of a revelation, Roberts had 38 in 2016 but also posted an NFL-worst 13 dropped passes, according to SportRadar, and had his yards per catch fall from 15 in 2015 to 10.4 last season.

After undergoing surgery in January and rehabilitating all offseason, Roberts notices a big difference from the way he felt a year ago to how he feels now in training camp.

“It was more mental,” he said. “When your body isn’t all the way how you want it to be or need it to be on game day, I might think I’ve missed a step.”

Despite those struggles at times last season, Roberts still delivered numerous big plays highlighted by his 41-yard touchdown catch in overtime to beat Tampa Bay in Week 8 last season and a TD in the final minute of the opener at New Orleans that was followed by a game-winning 2-point conversion to Michael Crabtree.

That play overshadowed Roberts’ big catch and is indicative of how his career has gone as a former undrafted free agent who often gets lost in all the talk about Crabtree, Amari Cooper and even newcomers Jared Cook and Cordarrelle Patterson.

But quarterback Derek Carr said whenever he is asked about how good those other higher-profile receivers are he always adds Roberts to the mix.

“I don’t know why he goes under the radar so much,” Carr said. “That man has made game-winning catch after big-time play and all these things. It’s because he works his tail off. It’s no secret. This man goes out there every single day, he puts in the extra work when no one is watching, he studies his stuff and he asks me questions.”

That work ethic has helped him develop from an overlooked player out of low-profile West Alabama into a key performer on a playoff team. Roberts leads the NFL with four game-winning TD catches the past two seasons

“They need to know who I am,” Roberts said. “I don’t want to fly under the radar anymore. I’m trying to make it happen. I have a family to provide for.”

NOTES: Cooper missed his fifth straight practice and sixth out of seven with a leg injury. … Defensive Player of the Year Khalil Mack sat out a second straight practice. … Practice ended with TJ Carrie intercepting Carr and returning it for a touchdown. 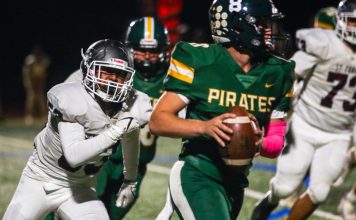