WATSONVILLE—Every year, Santa Cruz Toys for Tots – and the numerous volunteers that support it – make sure children across the county have a surprise on Christmas.

Last year, the organization provided more than 11,000 toys, games, bikes and other gifts.

On Tuesday, when a rainstorm drenched the county for nearly 24 hours, the organization got a surprise of its own. The roof of the warehouse serving as this year’s operational base began to leak—in several places.

Now, in addition to the toys to help meet this year’s demand, the organization is asking for donations of supplies to help it weather the weather and keep the toys dry.

This includes cardboard to help keep the floor dry, boxes, squeegees and rolls of plastic sheeting such as Visqueen.

In addition to her normal duties of coordinating volunteers to help sort and organize the toys, Valadez on Monday was arranging numerous buckets to catch drips, and shifting piles of donations to dryer spots.

She credited Berman Enterprises for providing the space, as the company has done for the past eight years. She also said that a roofing company has been to the property several times trying to fix the problems.

The aging roof is slated for replacement soon, she said, although that repair will likely come far too late to help this year’s cache of goodies.

Toy donation bins are located at fire departments and other locations around the county. For information visit santacruzcounty.toysfortots.org. 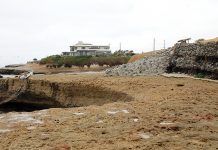 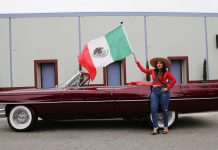 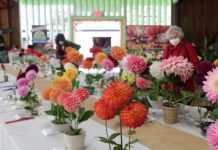