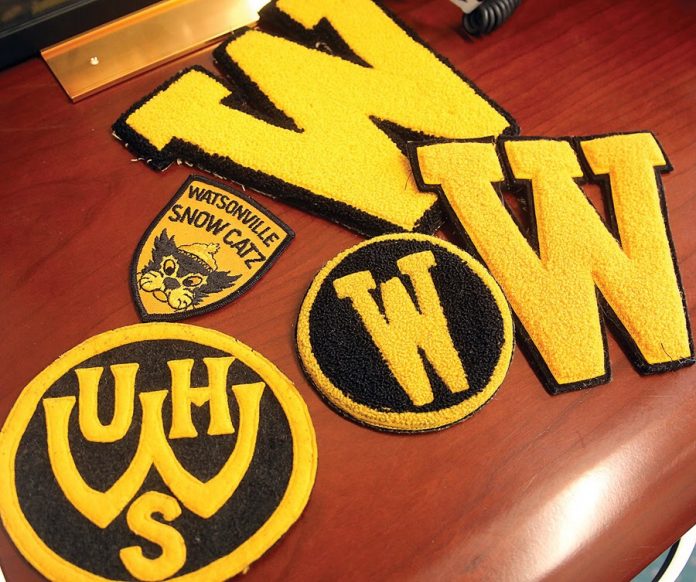 Black and gold relics| About Town

Tarmo Hannula: I was passing through the office at Watsonville High School the other day and spotted a collection of patches from over the years sitting on a counter. These moments are always a great surprise for me because they’re so packed full of history. The Snow Catz patch was from the ski team and there was one in there from when the school was called Watsonville Union High School.

A gigantic wine spill, some 97,000 gallons, broke loose into a creek in Napa County. The Cabernet Sauvignon escaped at the Rodney Strong Winery Wednesday after a blending tank leaked and dumped the red wine across the grounds and into a nearby creek.

Three firefighters died the other day when the air tanker (from California) they were flying in crashed while fighting the ongoing giant bush fires in Australia. Ian H. McBeth, Paul C. Hudson and Rick A. DeMorgan Jr. died instantly in the fiery crash of the Lockheed C-130 Hercules. Hudson was a graduate from the Naval Postgraduate School of Monterey. Governor Gavin Newsom said the trio was part of a California-based fire crew recently sent to Australia to help battle record- breaking fires that have blackened land greater in mass than Denmark and Belgium combined. The crash brings the death toll of the bush fires to 31.

The coronavirus, which started in China, has now affected 33 million people. Three cities in China have been put on lockdown and seven others are on alert. China is now starting construction of a hospital campus to combat the virus. The Great Wall is now shut down because of outbreak and there are expanded restrictions coming out almost daily.

Legendary PBS anchorman Jim Lehrer, who teamed with co-anchor Robert MacNeil on the heavily popular NewsHour, has died at 85. For 36 years Lehrer was best known for his dry, blunt and sober delivery. He went on to moderate a dozen presidential debates, in addition to writing novels and plays. He was quoted in the New York Times: “I have an old-fashioned view that news is not a commodity. News is information that is required in a democratic society, and Thomas Jefferson said a democracy is dependent on an informed citizenry. That sounds corny, but I don’t care whether it sounds corny or not. It’s the truth.”

Granite Construction was recently named one of the world’s most admired companies by Fortune Magazine. (More on this next week.)

In Japan, a massive fireworks show kicked off a pre-celebration for the Olympics Summer Games, which start in exactly six months. The event is expected to draw some 10,000 athletes, including 600 Americans, and will feature Paralympics, as well as four new sports, including karate and skateboarding. A new residential complex being built for the visiting athletes, among other things, will feature beds made with cardboard bed frames.

Photo: A scent of pine