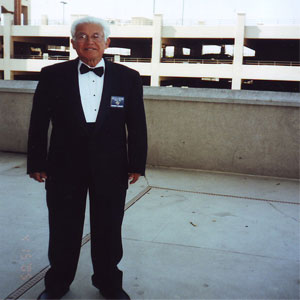 Ricardo Muruato died at home from Adenocarcinoma on March 18, 2017 surrounded by his loving family a short time before his 90th birthday. He resided in Watsonville since 1958 having emigrated from Mexico.
He was a gifted Mechanic who worked in local auto dealerships and garages, eventually working independently. Just as with all aspects of his life, he never gave up on a project regardless of the difficulty and thrived on the challenge of finding and resolving the problem. He earned the respect and trust of generations of his loyal customers. His expertise, ingenuity, and perseverance garnered him the title of “Maestro” among his customers.
He was a devote Catholic, who was secretly Baptized by a priest in hiding during the Cristero period inMexico. He faithfully attended Mass where he assisted in various capacities such as a lector, altar attendant, Eucharistic Minister and his favorite: ministering to the sick – bringing the Eucharist and spiritual comfort to the homebound and to dying parishioners. He participated in many innovative Diocesan programs like Movimiento Encuentro, Pequenas Communidadas, Eucharistic Ministry, Adult Catechism and Prison Ministry.
He was extraordinarily proud to be a member of Our Lady Help of Christians’ Knights of Columbus Council 11804. He earned his 4th Degree status and participation in their Honor Guard.
Throughout his life he actively participated in innumerable civic, political, community, social, and union events in Santa Cruz, Monterey, and Santa Clara Counties, wherever his support was needed.
He joyfully assisted in all of his four grandchildren’s schools from the Watsonville Cooperative Preschool through their years at Linscott Charter School and at their respective high schools.
He was an honorable man with high ethical standards and family values, giving-up business opportunities and financial success; instead choosing to devote care and attention to his wife and children and never regretting his choice of a family-centered life.
He was faithfully devoted to his loving wife, Lore Muruato, taking gentle and patient care of her throughout her long illness until her death on January 30, 1993.
He was first to say that he was far from perfect possessing a strong temperament, but always willing to recognize his errors, asking forgiveness, and trying to make amends. He was never able to say no to anyone who asked for his help stating that God put us here to help one another and that if he said no, it would be saying no to God.
Our father accepted his illness and dying like he lived his life: with infinite faith in God, extraordinary strength, unfathomable courage, and great humility.  He refused all treatment stating that he had lived in this world a very long time and was ready for what was next. As his body slowly shut down, his love and gratitude shown through his eyes until his final slow shallow breaths and his quiet final heartbeats ceased.
Our family: Betty, Richard, Gloria and Cesar Muruato; grandchildren: (Emmanuel Summers preceded him in death on May 5, 2001) Christopher Summers, Julia Muruato, and Amanda Muruato would like to extend our sincere gratitude to all those who supported our father and grandfather during his final months of life on “this world” and in his transitioning to “whatever is next.”
A Memorial Mass will be held at Our Lady of the Assumption Parrish in Pajaro on Saturday, April 1 at 11:00 AM.