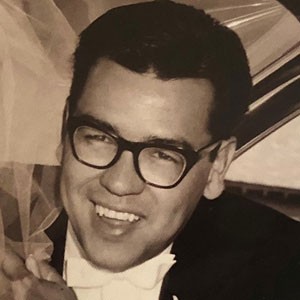 Richard M. Rodriguez passed away in his home, surrounded by his loving wife and family, in the early morning hours of October 2, 2018.

He was the eighth born of twelve children to David and Teresa Rodriguez. From childhood, Richard had a cheerful and light-hearted spirit. In high school he was a bookworm, hardworking student and an athlete. In 1953 he graduated from Watsonville High with a scholarship to University of California Berkeley where he attended school until the birth of his first child, a beautiful baby girl named Linda.

Richard was a father to three girls and one boy: Linda (Danny), Susie, Robert, and Robyn; grandfather to eleven; and great-grandfather to thirteen. Richard kept up with his grandchildren and was a huge part of their lives. They knew they could always call on grandpa to give them a ride home from school and maybe stop on the way to buy them a hamburger.

As a young man Richard started work at Watsonville Canning. There he met Dick Shaw, and future business partner and best friend Paul Milladen. In 1974 Dick Shaw opened a plant on Harvest Dr., where Richard worked proudly until his retirement in 2005. Richard was involved in the community, participating in 10ks, helping with the Breakfast with Santa, and a lifetime member of the Knights of Columbus. He also travelled to Phoenix, Arizona every year to watch Spring Training.

Richard and his wife of 53 years Hilda Rodriguez were the genuine patriarch and matriarch of the family they built together, taking care of them and living the example of what a good person is in the world today. He did anything for his family, and the people he loved he would call turkey face. Richard was preceded in death by his parents and seven of his siblings: Angie, Edward, David, Helen, Gilbert, Bobby, and Amelia. He is survived by his wife, children, and grandchildren; as well as his surviving siblings: Aurora, Tony, Danny, and Patricia. Richard had many friends and made an impact on the many groups of people he was a part of. Whether it was his tennis buddies, bowling group, or his hunting partners, Richard made everyone smile with his very loud infectious laugh and positive attitude.

Rosary and Memorial Service will be celebrated at St Patrick’s Church on Friday, November 9, 2018, at 10am. Mehl’s Colonial Chapel was entrusted with the funeral arrangements.