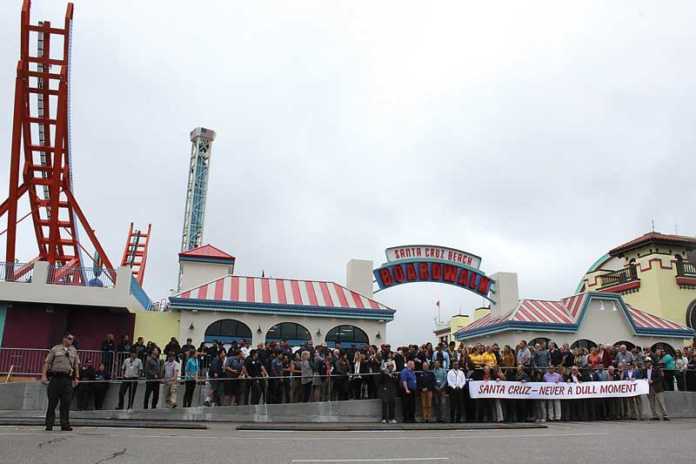 SANTA CRUZ — In 1909, employees of the recently-opened Santa Cruz Beach Boardwalk gathered at its entrance to capture a moment that has been enjoyed by future generations.

The people in the photo, nearly all of which are smartly dressed in hats and suits and ties, are holding a sign that reads “Santa Cruz: Never a Dull Moment.” The saying was a popular one of Fred Swanton, who laid the plans for a casino and boardwalk toward the end of the 19th century in Santa Cruz.

The saying is still used by Boardwalk employees today, said Kris Reyes, director of community affairs for the park.

On Thursday, for the Boardwalk’s 110th season, employees and community members convened in front of the park’s new main entrance to recreate that photo for the modern day.

“It’s one of our largest projects in the history of the company,” Reyes said during the Boardwalk’s annual summer kick-off party at the Cocoanut Grove. “We are very, very proud of it.”

Shockwave, a ride known as a Mega Disk’O that is manufactured by Italy-based Zamperla, is expected to open in early June, while Typhoon, a new version of a ride that was removed in 2009, is planned to open in July.

A number of local contractors worked on the project, including Slatter Construction.

“Not only did we ask Sid [Slatter] and his team to do an incredibly large project in a short window of time, but we asked them to do it during one of the wettest winters in California history, and his team did not let us down,” Reyes said.