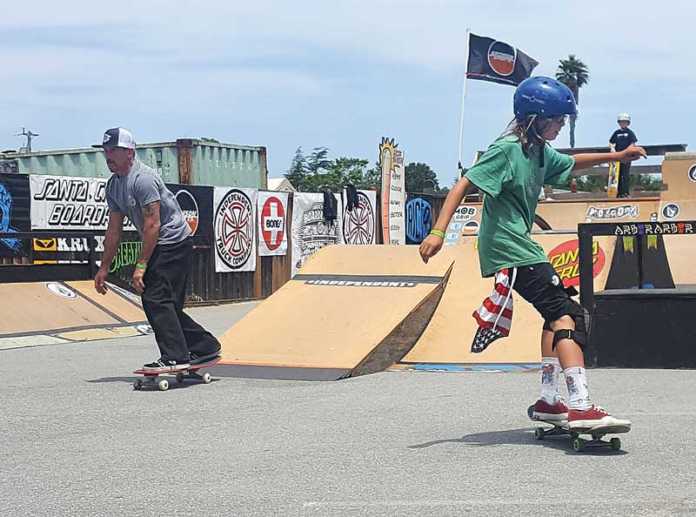 Merchants from all along Portola Drive and close to 100 vendors selling arts, crafts, local services, food and beverages came together to show off their wares, promote local artists and allow community members to come together. Portola Drive was shut down from 41st Avenue to 38th Avenue and people spent two days building skate ramps for the annual skateboarding competition.

Sara and Spencer Wright brought their 2-year-old son Micah, as they said they do every year. When he heard the music, he danced goofily in the street.

“It’s a pretty cool spot for the community to gather, meet for a beer or two and listen to music,” Spencer Wright said as the Shoreline Middle School Band started off the day’s line-up of music.

“It’s family friendly, there’s something for everyone,” he said before turning and asking his son, “Do you wanna keep dancing?”

Music and vendors were not the only things to entertain. The skateboarding competition drew large crowds, the opening act complete with toddlers being pushed around and rolling slowly across the arena. But as things got more competitive, cheers grew and gasps were heard as flips, fails and falls were all recorded.

“We had no idea this was going on,” Emily Raynal said, her twin daughters engrossed with the competition. “We were walking to the coffee shop, but this is awesome. It’s fun watching them.”

“Just how they went on two wheels, and fell and just take back off on their skateboards — I would do it so I could flip,” she said.

With valet parking for bicycles, many ditched their cars in preference for other alternatives. But even with the road closed, not many were phased. Like many of the local residents, the Wrights walked to the event.

“I don’t know — I like it,” Sara Wright said. “It’s a short little stretch with plenty of ways to get around it. Honestly, we are impressed.”

Each year, a nonprofit is chosen as a beneficiary, with this year’s being the Jay Moriarity Foundation.