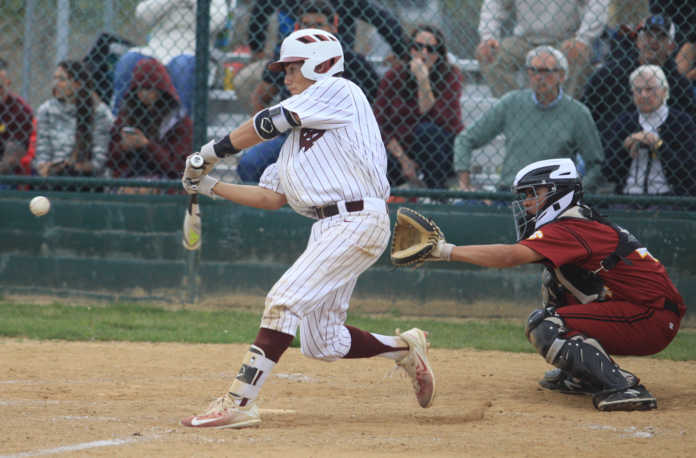 WATSONVILLE — The St. Francis High Sharks looked like they were back to their dominant ways that led them to a share of the last two Santa Cruz Coast Athletic League titles.

They hit another obstacle on Tuesday.

And they’re hoping it’s just a speed bump and not a roadblock.

The Sharks mustered just three hits and allowed three runs on errors in a brutal 9-0 SCCAL loss to the red-hot Santa Cruz High Cardinals to fall into third place in the league standings.

St. Francis (7-10, 3-3) has six games left on its SCCAL slate, none more important than the upcoming Thursday-Friday, back-to-back against league-leading Soquel High.

The Sharks host the Knights, who are 6-1 in league play, on Thursday and travel up Highway 1 for the second game on Friday. Both games are at 4 p.m.

“We still feel like we have a chance,” said St. Francis head coach Kenny Nakagawa. “We wanted to win three of three this week but if we can win two of three we’ll be OK. We feel good about this group. We don’t feel like we’re out of it.”

Santa Cruz (11-7, 4-2) sophomore starting pitcher Javier Felix tossed a doozey of a game, keeping the Sharks guessing with his fastball and slider while also mixing in a deceptive changeup.

He allowed two hits, both coming off of St. Francis junior outfielder Chase Watkins’ bat, no walks and struck out five over 5 2-3 innings to lead the Cardinals to their ninth straight victory.

“This is a huge win for us,” Felix said. “We feel pretty good, pretty confident that we can do whatever we want right now because we’re on a winning streak. We have to keep this rolling. Coach is pushing the right buttons.”

Felix was never in trouble during his outing and his offense gave him plenty of cushion, scoring four runs over the first three innings with aggressive base running that led to costly St. Francis errors.

Santa Cruz scored a pair of runs with two outs in the second, third and fifth innings and tacked on the final three runs in the top of the seventh to shut the door on any possible comeback.

Cardinals’ junior pitcher Ricky Parra closed out the final 1 1-3 innings, allowing a hit and a walk.

St. Francis senior starting pitcher Andrew Ciandro, who will play for NCAA Division I Cal State Bakersfield next season, took the loss after five innings of work. He allowed six hits but struggled with his command and walked five.

Senior pitcher Richie Martinez III entered in relief of Ciandro in the sixth and threw a perfect frame before giving up three hits, two walks and three earned runs in the seventh.

The walks paired with the four errors in key moments proved to be too much for the Sharks to overcome.

“We just have to shake it off,” Watkins said. “It sucks when you get beat that bad, especially against a lot of guys that we know. But we still have a chance at this thing so there’s no reason to pout about it after today.”

The Sharks were on a pretty good streak of their own, having won three straight SCCAL games and six of their last eight entering Tuesday’s important tilt. But their recently explosive offense, which scored 43 runs over its last three games, went silent.

St. Francis senior first baseman Ruben Ibarra, who will play NCAA Division I baseball for San Jose State next season, tallied the Sharks third hit of the day, tagging Parra for a double in the seventh inning.

Watkins doubled off Felix in the second inning but was caught in a tough-luck, 6-4 double play.

It was just one of many bounces — some even literal —the Cardinals had go their way in the second league meeting against the Sharks.

St. Francis lost 16-6 to Santa Cruz in their first game but was looking for a much better showing on Tuesday with its roster complete. Watkins, Ibarra and senior utility Joseph Kovacs were all missing during the first lopsided loss because the trio was busy helping the school’s basketball team reach the California Interscholastic Federation Division V championship game.

In the end, the streaking Cardinals were too much.

“We thought about them,” Felix said of the Sharks’ trio, “but if we play our game nobody can really beat us.”