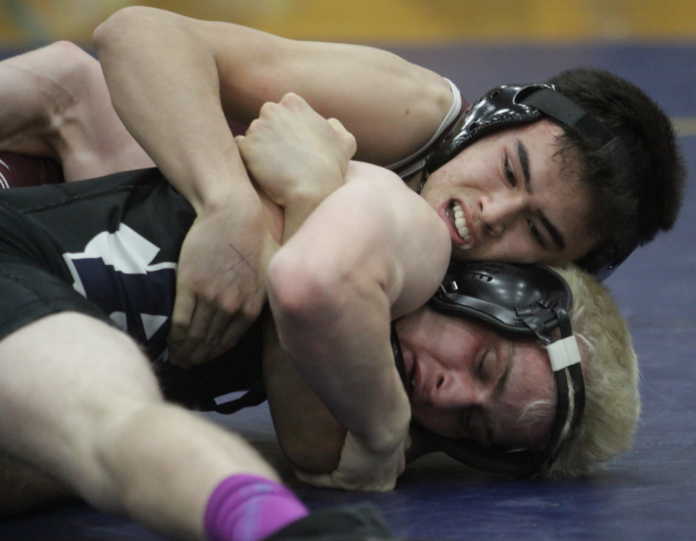 SOQUEL — Redemption is said to be a sweet moment.

For Aptos heavyweight Matty Maestas, there has never been a better feeling.

“This is the best thing I’ve ever felt,” Maestas said. “This is what I’ve wanted all year long and I got it.”

And he wasn’t the only one.

Aptos, which went a perfect 6-0 in dual meets this season, had a wrestler in all but three of the 14 divisions to tally 216 points and leave second-place Santa Cruz (107) in the dust.

“It feels even better that I can help do it this time,” said Maestas, who did not wrestle in last year’s finals. “Doing it with this group of guys and girls is great. I love ‘em.”

Maestas, the No. 2 seed, pulled the upset of top-seeded Luna with a third-round pin after a knock-down, drag-out match. He saw his shot during the opening seconds of the final round and took it.

“I was trying to work some move and it wasn’t working,” said Maestas, who had lost to Luna via a first-round pin earlier in the season. “I found my position to be able to turn him and I just went for it.”

Olson was the first Mariner to be crowned a champion, coming up with a stunning second-round pin of St. Francis sophomore Justin Parker, who was up 5-0 after the first round but found himself finish short of the program’s first-ever league championship during its inaugural season.

“I guess I just messed up,” said Parker, who fought his way into the final as the No. 3 seed. “It happens to everyone.”

A first-year wrestler, Parker said this season has been the definition of a learning experience.

“Everything was pretty new, I was just getting a feel for it,” Parker said. “Next year I’ll be more ready.”

But his season’s not over yet, as he’ll move on to this week’s Central Coast Section Championships at Independence High in San Jose.

It’ll be a new experience for most of the Mariners’ champs as well, except for Dutton-Jones and Vega. The former went 2-2 overall and the latter finished 1-2 at last year’s section championships.

Dutton-Jones’ pin at the 1:46-mark against Santa Cruz’s Donovan O`brien was the start of the Mariners’ night-capping domination. They won four of the last five matches all by pins.

Maestas gave the enthusiastic fans and emphatic close to the night as cheers of “AP-TOS!” rained down from the stands.

“I couldn’t hear them,” Maestas said. “I could barely hear coach Reggie. Whenever I do anything I go blank. I was focused. I really wanted to win.”