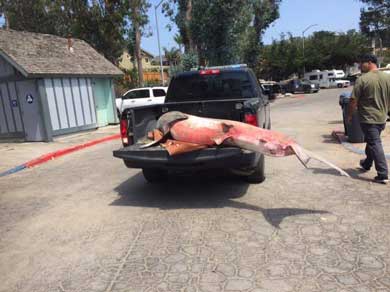 SANTA CRUZ — A juvenile Great White Shark was found washed up on a Santa Cruz beach near 26th Avenue recently.

Several State Park workers lifted the 10 foot Shark onto a rubber sling and into the back of a truck to be transported.

“The shark was freshly washed up on the shore and had a large gash on its head and a missing tooth. It looked like it was struck by an engine blade,” said beach-goer Cherie Fischer Leon.

After a kayaker’s boat was bitten off Lighthouse Point at Seal Rock several weeks ago, there was a ban put on Santa Cruz beaches and the public was advised not to go into the ocean. The ban lasted for five days.

The Jr. Lifeguard program, and Surf Schools in Santa Cruz County were especially restricted, but David Mayberg of Santa Cruz Surf School and his students still partook in their regular surfing activities.

“There are sharks out there all the time. There is no greater risk because one bit onto someone’s boat. It’s part of the risk of surfing, like when you’re camping there is a risk of bears and mountain lions,” he said.

CHANEL ESCOBAR - July 1, 2022
WATSONVILLE—Pajaro Valley Arts (PVA) will host a one-day conference on July 9 centered around the figure Our Lady of Guadalupe.  Attendees will explore the historic...