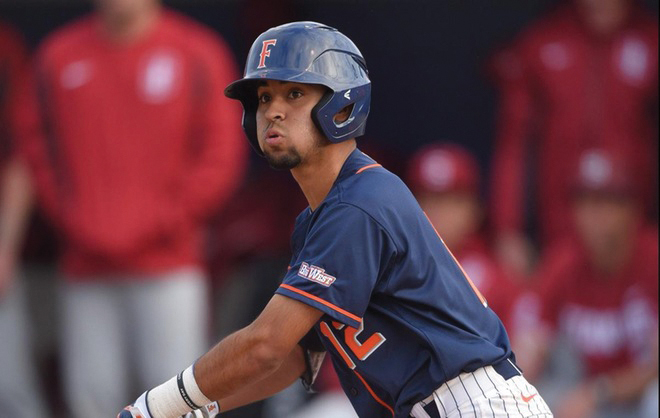 As a freshman at nationally ranked Cal State Fullerton, St. Francis High alumnus Sahid Valenzuela ranks second in the Big West Conference in batting average (.370) and hits per game (1.42) and has been named to the Brooks Wallace Award Watch List — an award given to the nation’s top shortstop.

Everyone in his corner knows and boast about his instant success with the Titans, ranked among the 20 college baseball teams in the nation by multiple polls. His family, his coaches and his former teammates at St. Francis have all kept a close eye on his numbers and his accomplishments through his first 30-plus games of Division I baseball.

Which is good because Valenzuela would be out of loop without them. When asked about being named to the Brooks Wallace Award Watch List, the former Shark said he had no idea he’d made the list.

“I don’t really care about that at this point,” Valenzuela said. “I’m just trying to play baseball and help my team out in whatever way I can. I’m not thinking about any of the awards or any of that stuff. Just focusing on baseball.”

Valenzuela, who was named the Pajaronian’s Baseball Player of the Year last season, broke into the Titans’ starting lineup six games into the season and has been a staple as a midfielder ever since. Following a short adjustment period in his first few starts, Valenzuela has been nothing short of spectacular.

As of Thursday night, Valenzuela led the Titans in multi-hit games (16) and hits (47), while also recording a base hit in 12 of his last 13 games — seven of which were multi-hit performances.

He also holds a solid fielding percentage (.985), although he admittedly has not yet wowed his teammates and coaches with one of his Derek Jeter-esque plays that he routinely showcased while sporting the maroon and gray.

But again, he doesn’t know his exact numbers. All he knows is that he’s helping his team win games.

“I came in having that mentality of working hard and hopefully being able to start, working my butt off and hopefully it would pay off,” Valenzuela said. “So far, it is.”

St. Francis head coach Kenny Nakagawa said it would be out of character for Valenzuela to pay attention to numbers. He never did while playing for the Watsonville-based private school and it worked out pretty well, as he committed to Fullerton before his junior season.

“That’s not him,” said Nakagawa, who coached Valenzuela for four seasons at St. Francis. “He’s not that guy. Him not knowing that stuff, that’s him. That’s really who Sahid is. He has that work ethic that you just can’t teach. He’s worked his butt off and all that success he’s having, it couldn’t be happening to a better kid.”

Nakagawa and a few of the members of the St. Francis baseball team made the drive to Cal Poly over the weekend to see Valenzuela play against the Mustangs. The Titans lost two of three but Valenzuela had a solid series, going 5-of-15 with two scored runs and an RBI.

Nakagawa said what he saw from Valenzuela brought a smile to his face just like the old days, when he led the Sharks to three Santa Cruz Coast Athletic League titles in four years.

“He just lights up the room,” Nakagawa said. “He has that big smile. He plays with such passion. He loves being out there. He’s like a kid in a candy store out there. He’s himself when he’s on the field.”

Heading into the weekend’s three-game series against UC Irvine, the Titans (6-3) were sitting in a tie for second place in the Big West with Cal Poly (8-4) behind Long Beach State. Fullerton, defending conference champions, will have a critical three-game series against Long Beach State, which carries Watsonville High alumnus Chris Rivera, to end the conference season.

“We just have to keep doing what we’ve been doing,” Valenzuela said. “We’ll see how far we can go.”