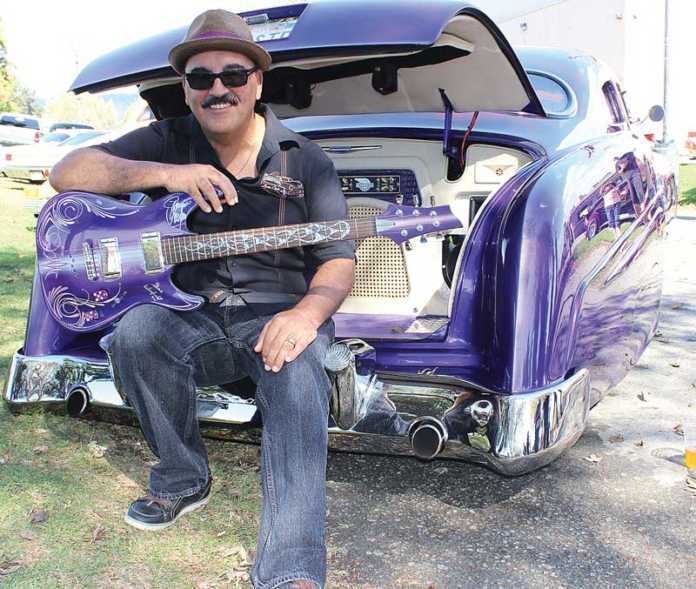 WATSONVILLE — As a child growing up in Watsonville, Phillip Retamoza had two passions: Mercury vehicles and music — specifically guitar.

Movies like “Cobra” or “Rebel Without a Cause” created an itch to own a similar car, and when he first heard Santana, he knew he wanted to play like that too. Today, not only has he designed and customized the car he longed for, but he has also played with lead singer Andy Vargas and met hero Carlos Santana.

But, in the ultimate merger of passions, Retamoza has transformed his 1950 Mercury — complete with an amplifier, two monitors and DJing ability. With his matching guitar, Retamoza now takes his car on the road to shows, weddings and events all across the county and beyond.

“I was born in Watsonville, have lived here all my life,” Retamoza said. “I have played guitar all my life and now I play guitar out of my car.”

For almost 30 years, he has worked on fixing up his car to match his vision. The modifications are numerous: his 1952 rear quarter panels were extended, the back bumper is customized, his Chevrolet 350 crate engine is chromed out, his paint job comes from renowned painter Gene Winfield, and Retamoza said this is just the beginning. A graphic designer, he knew the direction he wanted to go in from the very beginning, and modeled his car after the Hot Wheels Purple Passion toys.

“There’s custom cars and then there are custom cars you can modify to your own personal design,” Retamoza said. “I designed it on a computer first, did a rough sketch, and it kinda went from there. It’s really close.”

The car is also international, as some of the modifications have required parts to be acquired from around the world.

“A couple of really cool things about it is it has Italian glass taillights and you have to get them from Italy,” he said. “The steering wheel is pearlized from Pearl Craft in Australia. It’s pretty special, no one else does it but them. It is just beautiful what they do.”

Today he is focusing more on the events side of his endeavors, hoping to play more out of doors. Offering his service as an all-in-one DJ and even chauffeur, he said that while not his original intention, this new direction is what he really wants to do.

“It’s a beautiful car, but it’s not just a car — it’s an entertainment system,” Retamoza said. “It didn’t start out that way, but that’s where it is going. I just absolutely love doing it.”

And his passion shows. Whether it is the tone his voice takes on talking about meeting long time hero Carlos Santana and winning his guitar in a raffle or how he describes his car down to the last detail, Retamoza doesn’t hold back. Also in a band, Tortilla Soup, that plays out of San Jose, Retamoza said it is his specialty, especially classic rock.

“People can see the passion when I go up and play,” he said. “I zone out and play and I am not aware of what is going on around me, I just get to play my music and enjoy it.”

With his wife supporting him, he said that he doesn’t go to shows for awards or trophies, rather to try to do good things and show what is possible.

“I don’t go to car shows for awards, I go to play and have other people enjoy it also,” he said. “I try to do good things with it too and show kids to how to think out of the box. Just because you grew up in Watsonville, don’t think you can’t do anything, you can. If I can do it, you can do it.”

At the end of the day, he said he wants to pay homage to the community that built him.

“I love my town, that is why I am still here,” he said. “That is why I put that I am from Watsonville, not Santa Cruz County. I am proud of where I come from.”