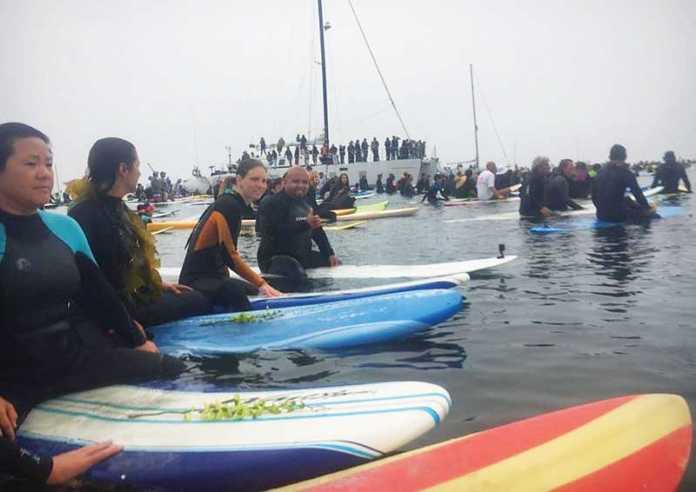 The world on pause, a tribute to remember

PLEASURE POINT — I know the day he died, Jack O’Neill, as a day my world got bigger even as the earth became one person smaller.

I can’t pretend to have emotionally experienced the significance of this person’s life. A person I had only heard of and never met —  but yet was and is so loved and revered in a community that has adopted me into its fold. Citing his accomplishments, talking about who he was, how he changed surfing and the world is something I feel strangely unqualified for. How am I to write about a person larger than life?

The surfing community that surrounds me where I live in Pleasure Point took time to talk to me about him and pointed out his home when I had first moved here. When I rented my first wetsuit, it was from the O’Neill on 41st Avenue in Capitola. But I had been kept from the ocean most my life — either because of geography or because of my severe nearsightedness that made it a hazard to attempt to swim out beyond the white water. I used to watch the surfers in awe from the cliffs, jealous and longing to feel the freedom I imagined them experiencing as they surfed. Their wetsuits always made me think of small ants on the surface of the water. Then O’Neill died and his celebration of life was opened up to the world to participate in honoring him.

My husband, Adam, a surfer since childhood, and I went by his house to witness the outpouring of love and respect — evident by the sheer number of flowers, cards and memorabilia that continued to appear in front of his East Cliff Drive home even as days and weeks passed. And then we were talking about his paddle out.

It was with some trepidation I found myself agreeing and wanting to participate. With the celebration spanning the globe across eight countries and two days, I felt like an impostor waiting to be found out, compelled forward by sheer awe of the giant presence of a person no longer alive. We went to rent my wetsuit on Friday — rented from the same O’Neill storefront where I was first introduced to surfing.  On Sunday, we joined the hoards of people winding their way down from the iconic cliffside home of O’Neill and into the water.

Mothers toting babes in strollers, dog walkers, elderly couples bringing chairs to observe from above and surfers of all ages began converging around one home to pay respects to a legend and an icon. People came from New York, Washington, Pennsylvania and all corners of the nation.

The paddle out, a time-honored tradition of surfers gathering to memorialize one of their own, brings people together to form a circle out in the ocean where they throw leis and flowers, shout, clamor and stir and splash up water. A proper water tribute for people whose love for sea and sport went beyond just surfing the waves. And in O’Neill’s case … it was a tradition that broke records.

With estimates ranging from 2,000 to 3,000 surfers in the water, the paddle out circle stretched out more than a half-mile across and is believed to be the largest paddle out in Santa Cruz history. Hundreds of people clustered together to bear witness in boats, and on the cliffs, thousands more moved together forming a living, breathing, thick cloud on the horizon. Now the ants were on the other side.

Paddling out, no one was left behind. People struggling to make it out past the mile buoy to the circle, because of age or fitness, were picked up and towed behind willing, kind strangers. In the fog shrouded water by 10 a.m., when the ceremony began an hour later, the sun broke through the clouds as if on cue. Shaun Tomson, a former world champion professional surfer, began his eulogy, broadcasted out to sea on loudspeakers from the 65-foot O’Neill catamaran. Within minutes it was over. The splashing died down, the hollering quieted. While respectful, and the crowd was also lively with people paying tribute in a host of ways. (One person brought out a mostly empty bottle of Jack Daniel’s whiskey out on the front of his surf board.) People epitomized what I began to imagine was a reflection of O’Neill’s presence. They were passionate. They were inventive. They were helpful, kind and gracious (especially to the folks like me who had no idea what they were doing.)

It is in this way that I feel my world has grown exponentially since first reading the news that O’Neill had died. Not only was I witness to the world on pause to remember one person, but never will I forget the love and impact he had on the members of my own community and how that was extended to me.