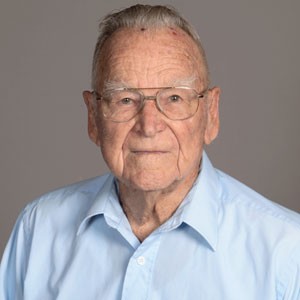 Resident of Santa Cruz County for over 70 years

Thomas Garske passed away peacefully on July 26, 2019 at his Santa Cruz home surrounded by his family.

Born in Sacramento, California to Leo and Sophie Garske, he was 91 years old. Mr. Garske was raised primarily along the west coast and graduated from Campbell High School in California.  A few years later he joined the U.S. Army and served his country during the Korean Conflict. Prior to enlistment he had met his future bride Dorothy Louise Stewart while folk dancing in Santa Cruz. The couple was married while he was stationed in Alaska as a radio operator.

Returning to Santa Cruz following his military service, Mr. Garske began a career as a carpenter that spanned over 36 years. He was active in several church organizations and civic clubs.  Mr. Garske was a dedicated parishioner of Resurrection Catholic Church in Aptos, in Cursillo in Christianity, and in the Knights of Columbus.  He was also a member and past president of the Cabrillo Host Lions Club, and a long-time 4-H Club Leader. Conscious of his gift of a rare blood type, he was also a frequent donor for the American Red Cross, donating over 13 gallons of blood in his lifetime.

Tom Garske was preceded in death by his wife, Dorothy, and his daughter Patricia. He is survived by 5 children, 14 grandchildren, and 10 great-grandchildren.

A vigil ceremony will be held on Friday August 2 at Resurrection Catholic Church (7600 Soquel Drive in Aptos) beginning with a Rosary at 7 p.m. followed by remembrances by family, friends and community.  A Memorial Mass will follow on Saturday August 3 at the church beginning at 11 a.m. He will be laid to rest in a private ceremony at Holy Cross Cemetery, beside his beloved wife Dorothy.

Flowers may be sent to Resurrection Church (please no live plants) or a contribution made in his memory to: Resurrection Catholic Church for the remodel of the Markey Community Center, or to the Knights of Columbus; or to the Cabrillo Host Lions Club; or to the Santa Cruz Chapter of the American Red Cross.