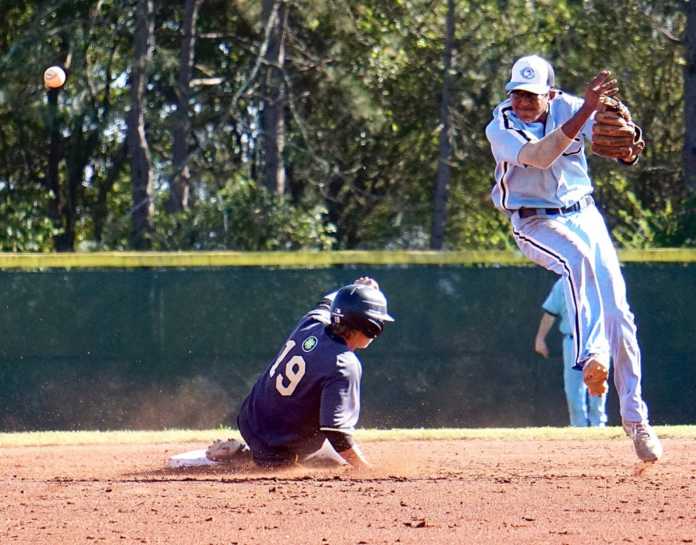 Just getting drafted, never mind playing an inning in the major leagues, is an accomplishment and a privilege.

That is the goal for Cabrillo College sophomore shortstop Kai Moody.

A contact hitter who has the frame to develop power with increased body mass, Moody projects as a prototypical middle infielder capable of getting on base in a variety of ways while providing solid defense up the middle.

“My fielding is usually my best weapon,” said Moody. “I feel like I have range on the infield, I can get to balls a lot of other people can’t.”

To get serious draft consideration though, Moody knows he must not only get to the ball, but also successfully deliver them to the appropriate base — something he has struggled with over the last two years because of a hitch in his throwing motion.

When Moody releases the ball to first base, it tails out of his hand and moves like a two-seam fastball. A great skill to have while on the mound. In the middle infield? Not so much. Over 58 games at the college level, Moody’s faulty throwing motion has produced 24 errors.

In the race to draw attention in the draft, little things like throwing accuracy can mean the difference between being selected or not.

Realizing this, Moody has worked with pitching coach Mike DiTano since arriving on campus to correct the deficiency.

“We are trying to eliminate arm drag,” DiTano said. “We are trying to incorporate his body, to keep his front side pointed at the target, to fire the right hip and right shoulder to allow proper sequencing in his throwing to improve accuracy, fatigue and injury prevention.”

If he is unable to straighten out his throws, it is likely that Moody would find himself a full-time second baseman where its easier to stash a wild arm, or he may be overlooked entirely.

“My goal off the bat since I came here (Cabrillo College) is that this is going to part of my journey towards being a professional,” Moody said. “I started playing baseball as soon as I could walk with my dad, and it has always been my goal to play professionally. From the first time I talked to coach, I knew this was the best place to help me do that. But for now, I have to pay attention to this season.”

By its very nature, baseball is a sport of attrition that rewards those who can endure and adapt as they progress through various levels of competition.

Each spring, 15 million boys take to little league fields across America with the dream of one day becoming a pro player.

Only about 450,000 continue to play through high school and that number dwindles to just 48,000 by the time college rolls around.

Less than .025 percent of the remaining pool of players go on to be drafted by major league franchises.

“(Kai Moody) is right on the fringe,” said Cabrillo baseball coach Bob Kittle. “He needs to get bigger and stronger and prove himself at the next level.”

If Moody makes it to a NCAA D-1 school, the probability of him being drafted skyrockets to 10.5 percent.

While Cabrillo is most certainly not the famous Xavier School for Gifted Youngsters from the X-Men comic book franchise, it has become a finishing school of sorts for young men on their road to four-year institutions that hope to one day be selected in the First-Year Player Draft.

In nine seasons with coach Kittle at the helm, four Seahawks have gone on to be selected by major league franchises, including Atlanta Braves relief pitcher, and Santa Cruz native, Shane Carle.

Moody has had to learn how to play through minor injuries, and more significant setbacks on his quest to play in The Show.

In September, Moody underwent Laparoscopic Hernioplasty surgery to repair tears in his abdomen and right oblique, forcing him to take a month-and-a-half off from baseball-related actives.

The time away from the game was maddening for the young seamhead, as Moody readily admits he was relentless in his efforts to be cleared to participate in the fall-ball schedule. While the procedure is considered to have been successful, Moody still deals with some lingering in-game discomfort and post-game sourness that is to be expected up to a year following surgery.

Based on his throwing issues and recent surgery, it seems unlikely that Moody will be drafted this June. But with opportunities to continue playing at a four-year NCAA D-1 school already available to the young stud, there is still time to adapt and correct his flaws.