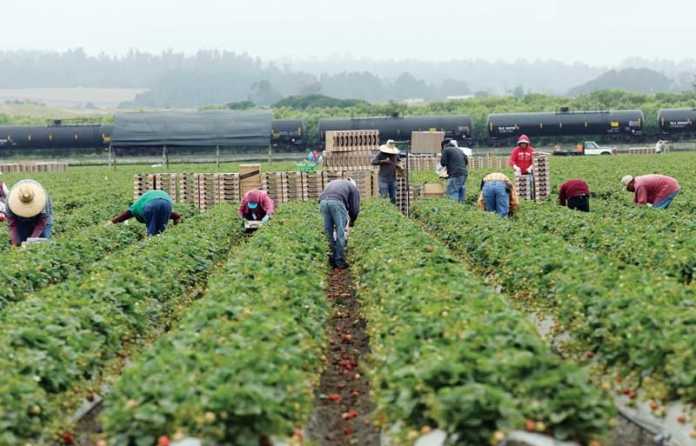 (A long string of empty oil tankers are lined up on the railroad tracks behind a strawberry farm on Beach Road. Photo by Tarmo Hannula/Pajaronian)

WATSONVILLE — The Santa Cruz County Regional Transportation Commission on Thursday approved a contract allowing a new operator to take control of the 32-mile rail line that runs from Watsonville to Davenport.

The vote means that Lakeville, Minn.-based Progressive Rail, Inc. will take over the rail-freight operations in South County from Iowa Pacific.

The commission on Nov. 2 filed a notice of default against Iowa Pacific Holdings, the company that formerly ran the line under the name Santa Cruz and Monterey Bay Railway Co.

In the filing, SCCRTC accused Iowa Pacific of failing to maintain the railways, bridges and other parts of the line, and of not paying more than $23,000 it owed for running the Christmastime Polar Express train. The commission also said that Iowa Pacific still owes the county for storing railcars along the tracks.

“The Progressive Rail proposal demonstrated the greatest strength to take over the existing operation from Iowa Pacific Holdings, develop the freight business and implement passenger excursion operations,” the RTC stated in a staff report.

The RTC will be financially responsible for an estimated $3 million in damage repair to the tracks, over-crossings, bridges and other rail infrastructure, much of which occurred during storms in 2017, according to Mendez. RTC has applied for a FEMA grant to help cover the repair costs.

After those repairs are complete, Progressive would be responsible for maintaining the rail line, Mendez said.

The contract also allows the company to store up to 100 rail cars along the track.

Phase two of the contract will begin after the RTC completes the ongoing Unified Corridor Study of the rail line, which is estimated to be by the end of the year.

If the RTC decides after that study to keep the tracks in place, Progressive has the option to launch passenger rail service along the entire line.

But proposals to create a rail system have long drawn controversy.

The issue drew people from across the county, who packed the Watsonville City Council Chambers to address the board for nearly three hours of testimony.

Big Creek Communications Director Bob Berlage said that the company has used rail service since purchasing its South County property 50 years ago. He said the company receives about eight railcars per month.

Ending the service, he said, would cost the company an additional $40,000 per year.

“Our employees and our company depend on the rail service,” Berlage said. “It’s critical to us.”

Watsonville resident Brandon Kett called the rails an “important asset,” and pointed out that the contract with Progressive requires the company to invest in the rail, thus protecting the environmental features along the way.

“It would be a mistake to remove the rails,” he said.

Del Mar Foods President P.J. Mecozzi said his company ships about 50 railcars per year. He said that rising fuel costs and a shortage of truck drivers have exponentially raised the cost of that option.

S. Martinelli & Co. CEO John Martinelli said he supported keeping freight service in South County, while allowing North County to create a bike trail on the rest of the line.

In a statement read by a representative, Capitola Mayor Mike Termini threatened lawsuits and criminal charges in the event of disaster along the line.

But in its report, the RTC pointed out that there are no petroleum refineries in Santa Cruz County, no locally produced fuels and no distribution facilities, and as such there would be little need for such rail traffic.

“We’re not on the road to somewhere else,” he said. “We’re the end of the line.”

Watsonville Community Development Director Suzi Merriam said that businesses in Watsonville would suffer if the freight service was lost, and said that transporting hazardous substances is safer by rail than over land by truck.

Commissioner Virginia Johnson urged the board to wait until the Unified Corridor Study was completed.

“This is the most contentious transportation issue the community has seen in years,” she said.

Commissioner Patrick Mulhearn said he would have supported a freight-only contract, but expressed concern that the contract gave control to Progressive for the next decade.

“I can’t support a contract that further disadvantages our decision makers,” Mulhearn said.

Commissioner Randy Johnson also said that a yes vote would close the commission’s options for the rail line.

“This is the third time that staff has made this recommendation, and they were wrong the first two,” he said. “This is a bad policy with a bad contract and we’re locking ourselves in in an unnecessary way.”

Greenway Santa Cruz County supports keeping the freight option in South County, but converting the rest of the rail line into a pedestrian and bike trail.

Sara Clark, an attorney representing Greenway, said that the vote essentially locked up the 32-mile corridor for the next 10 years.

In addition, nothing in the contract prohibits Progressive from expanding freight rail service throughout the entire county, Clark said.

Greenway Executive Director Gail McNulty has said that the rail system was built as a freight line for a relatively small county, not as a commuter corridor or for pleasure trips.

Instead, McNulty has said the money would be better spent improving the Santa Cruz Metro bus system.

“Today’s vote will not solve gridlock problems,” she said.

Santa Cruz County Friends of the Rail & Trail Board Chair Mark Mesiti-Miller disagreed, and pointed to the Sonoma–Marin Area Rail Transit, a successful passenger rail service and bicycle-pedestrian corridor in those counties.