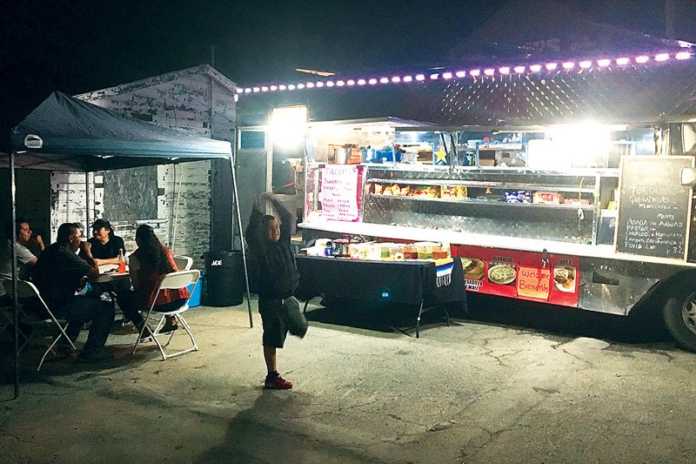 I was feeling peckish after covering a late meeting of the Pajaro Valley Unified School District Board of Trustees Wednesday, so I took a drive through town, vowing I would stop at the first taco truck I saw. That turned out to be Paloma Mexican Food, located in the vacant parking lot behind Lulu’s Fiesta Liquor & Deli, 1102 Freedom Blvd. Paloma is a bare-bones stand with a single table, which on that night was occupied by a family happily talking over their plates of food. I ordered two carne asada tacos, which came with a small pile of freshly grilled onions. The tacos came with only meat because the condiment bar included the cilantro and chopped onions, plus three types of salsa and lime wedges. The tacos were delicious, perfectly cooked and piping hot. The stand is there every day from noon until midnight.

I am not a fan of fancy coffee drinks, preferring instead to add a bit of cream and sugar to a quality cup of plain old joe. I found that one morning at Zizzo’s Coffeehouse & Wine Bar, a friendly little place tucked into the Brown Ranch Marketplace on Clares Street in Capitola. Definitely worth a visit before shopping at nearby Trader Joe’s.

I took my first ride on the Fireball at the Santa Cruz Beach Boardwalk, which was one of the most thrilling theme park rides I have ever been on. It places riders on a quickly rotating platform that swings back and forth on a giant pendulum high into the air. The Boardwalk describes it as “disorientation at its finest.” My wife said it was so scary it was almost not fun. I agree with both.

An area that has been really taking off over the past few years (as far as businesses go) is the lower end of 41st Avenue in Capitola. From small cafes to Chinese, Middle Eastern and sushi restaurants, boutiques, surf shops and second hand clothing, the area is a hub of activity. Recently Sarah and I tried Kaito, a ramen noodle place that also features sushi. I had the Charshu Spicy Garlic “Special Ramen.” It was served very hot and was a generous portion. The broth was what made it memorable — it was delicious. I’ll eat anything with noodles — cardboard, gravel — it all tastes good. The ramen noodles were superb. Service was quick and friendly. We sat on their little outdoor patio, which was a little crowded, but they had plenty of indoor seating as well. They’re at 830 41st Ave.; phone number is 464-2586.

On the West Side of Santa Cruz is the West End Tap & Kitchen, 334D Ingalls St. It’s a very trendy spot now and full of life. I recently got their house burger, which comes with some of the best fries I’ve had. The burger is a sure winner. Since I’ve been staying off of alcohol, I ordered their Hermitage Brewing Root Beer called “So Duh!” The label reads: “Soda with an Attitude.” I like the stuff. It has plenty of rich flavor, heavy in vanilla. I’m learning that non-alcoholic drinks are pretty limited on most menus. I think it’s a wide open area for some entrepreneur to explore, especially when you consider the endless list of wines, beers and cocktails out there. My wife and I have been to West End many times and have always enjoyed their fare and the atmosphere.

If you’re anywhere near West Side Santa Cruz in search of a bite, a drink or even some tunes, stop by Santa Cruz Mountain Brewing, 402 Ingalls St. It’s nestled in a bustling hub of businesses, including Kelly’s French Bakery, the West End Tap & Kitchen, a butcher shop, lamp store, boutiques, New Leaf Market and more. Besides food and their own beers on tap, SCMB features live music on a regular basis, like Clay Page, who brought his blend of country music recently to the outdoor seating section. My wife and I took in some of the music after dining at the West End. Afterwards we capped the evening with a short jaunt over to West Cliff Drive for a relaxing drive along the rocky coastline as the sun wandered off over the horizon.