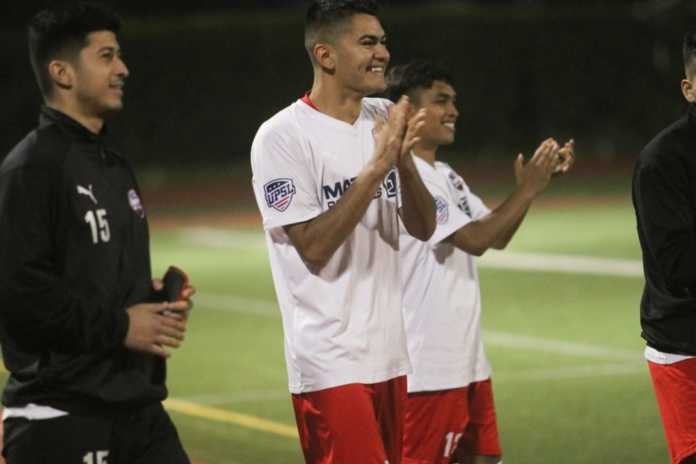 By: Juan Reyes
July 4, 2019
720
0
The Pajaro Valley United FC made its longest road trip of the season to Reno this past weekend. When the team got there, they didn’t realize they had to battle against more than just one opponent.
PV United notched a 3-2 win in extra time against the Nevada Coyotes FC in the United Premier Soccer League Wild West Division semifinals.
Along with the overtime periods, the team also fought against the warm weather conditions, which reached as high as 82 degrees by noon.
Plus, the PV United players had to get adjusted to the high altitude in the Biggest Little City in the World, which is at 4,506 feet above sea level compared to Watsonville at 29 feet.
“The altitude and the heat drained us a little bit,” Hurtado said. “It was kind of tough to do two 15-minute overtime periods. Luckily we were able to score a goal so we wouldn’t have to go into penalty kicks.”
Hurtado said the team was pretty excited after the game, especially after making the five hour trip to Reno.
“And knowing that after that win we’d be playing in the finals, it made (the trip) worthwhile,” Hurtado said. “It opened their eyes and made them realize they’re still alive and they’re doing it for a reason… to keep going.”
PV United forward Christian Cisneros scored the first goal of the afternoon to make it 1-0.
Hurtado said Cisneros missed a few shots that could’ve gave PV United a larger lead going into halftime.
“We probably would’ve been up four or five to zero if he had capitalized on some of these goals,” Hurtado said. “When he wasn’t as tired he was pretty much able to dominate their defense.”
Chris Rodriguez scored the second goal of the afternoon to give PV United a 2-0 just before the half.
“(Nevada) had a few chances as well but while we were up 2-0, we were pretty much dominating the game until they got the penalty kick,” Hurtado said.
During the second half the referees called a penalty on PV United that allowed the Coyotes FC a penalty kick, and shortly after the Coyotes FC tied the game at 2-2.
Hurtado said the momentum slowly started shifting the other way after the penalty kick.
“Any team would get momentum when they’re only down by one instead of two (goals),” Hurtado said.
The game went into overtime and the teams had a pair of 15-minute periods to decide who would move on to the USPL Wild West Division Championship.
It didn’t take long for Martin Lopez to find the back of the net as he scored in the first minutes of the first extra time period to give PV United a 3-2 lead.
Hurtado said at that point it was just all about holding back and playing a little bit more on the defensive side.
Next up for PV United (7-1-2), which finished third with 22 points in the division, is the UPSL Wild West Division Championship.
They’ll be squaring up against Contra Costa FC (9-0-1), which finished first in the division with 27 points.
PV United played Contra Costa in a regular season game on June 1 but came up short, 6-1. Hurtado said having some injuries and players missing in their last game really hurt their chances to win that game.
Hurtado said they tried to keep up with whatever players they had available that day, but it wasn’t enough to overcome a second half that was dominated by Contra Costa.
PV United played the same Contra Costa FC team in the preseason and was able to beat them. Hurtado said he believes they have a better chance of winning now that PV United has a full, healthy squad.
“With everybody going this weekend hopefully we can play a better game than we did this last game and get the same result as we did in the first game,” Hurtado said.
Hurtado said it’s going to be a great experience for both teams because PV United and Contra Costa FC are new to the league.
“For both of us to make it, it speaks highly of both of the teams,” Hurtado said. “We’re just trying to get this win and hopefully try to keep going.”
The winner of Saturday’s Wild West Division finals will play Cuervos FC (8-1-5), which finished third with 25 points in SoCal South Division.
The winner of the battle of California teams moves on to the UPSL national semifinals in Texas.
•••
Editor’s Note: This article will be published in the July 5 edition of the Pajaronian.
Share
Facebook
Twitter
Linkedin
WhatsApp
Email
Print

This week in Pajaro Valley’s Past, Feb. 26