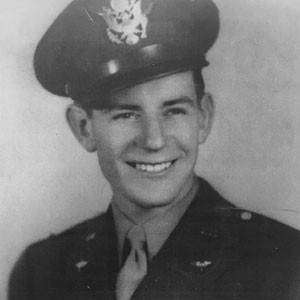 Born in Modesto in 1924 to A.L. (Bob) and Rose Roberts, they moved to Watsonville in 1929 to buy the business Taller Furniture, which became the family business Roberts Floor Coverings.

In 1942 at the age of 18, just after graduating from Watsonville High School, he enlisted in the Army Air Corp. He loved flying. He went through Cadet School and advanced training in flying and earned his wings. He made his way through the ranks emerging as 1st Lt. as a pilot and returned home before he was 21 years old. His B24 Bomber took part in 50 missions during World War II, flying out of Patanella, Italy over Europe targeting places like Blechammer, Ploesti, the oil fields in Pardubice, Czechoslovakia (now known as the Czech Republic) and others. The Czech Republic has given many honors to the 464th Bomb Group and to Wally’s 777th Squadron.

After the war Wally was part of many organizations in Watsonville and was considered a local war hero.

He leaves his wife of 71 years, Marie; his three children Rob, Marsha, and Jim, and daughter-in-law Carol; his four grandchildren Ami, Sam, Ryan, and Ruby; and three great-grandchildren.

His family invites the community to honor his memory on Saturday, Aug. 24, 2019 from 2-4 p.m. at the Pajaro Village Clubhouse, 739 Bronte Ave., Watsonville.