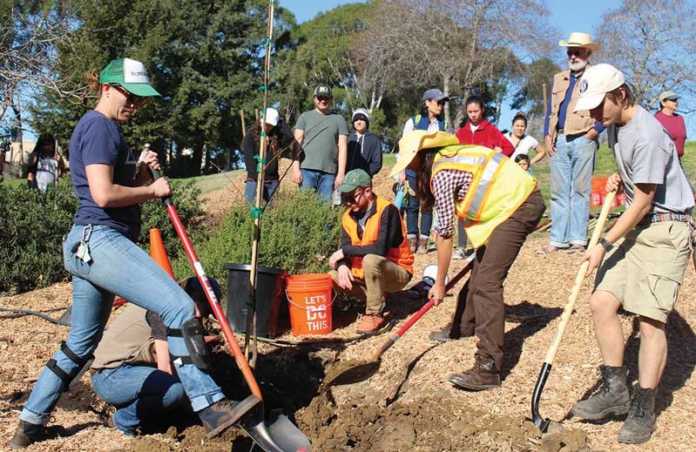 WATSONVILLE — A presentation board displayed in front of the Watsonville Nature Center on Saturday asked people to write down their own answer to the question: “Why do you love trees?”

Answers varied. Some pointed out they provide people with shade from the sun. Others mentioned how trees produce oxygen for us to breathe. One person wrote that they just loved the sound of the wind rustling through tree branches.

“Trees are so important for urban communities like ours,” said Rachel Kippen, environmental projects coordinator for the City of Watsonville. “They give us a piece of nature we can connect with on a daily basis.”

Kippen joined around 250 other volunteers who gathered in Ramsay Park on Saturday to celebrate World Wetlands Day. Hosted by Watsonville Wetlands Watch, the event is now in its ninth year.

This year Wetlands Watch teamed up with the City of Watsonville, Regeneracíon — Pajaro Valley Climate Action and other local groups to organize the planting of 45 drought-resistant trees along Watsonville Slough. Coast Live Oaks, Black Tupelos and Sawleaf Zelkovas were set up throughout the edge of Ramsay Park.

“It’s just so nice to see people getting out and getting their hands dirty,” Kippen said. “It’s easy to become detached from the environment when you live in the city. This is a great way for people to connect directly, to actually feel the earth in their hands.”

Aside from the planting, volunteers on Saturday enjoyed a number of other booths and activities set up in front of the Nature Center. Free reusable City of Watsonville water bottles were handed out. Mariachi group Alma de Mexico made their way around the park, serenading those hard at work.

Wetlands Watch Executive Director Jonathan Pilch was on hand helping families and other groups get organized. He stressed the importance of events like these bringing awareness to local environmental issues — particularly the protection of the Pajaro Valley’s wetlands.

“The wetlands are at the center of our community here,” Pilch said. “They sustain us. And everything we do affects them in return.”

The tree planting is just the first of many planned for the upcoming year. The Watsonville Urban Forest Revitalization Project plans to plant 300 trees and hundreds of other shrubs at various sites across the city. The project was approved after Wetlands Watch received a $340,182 grant from the California Department of Forestry last year.

In addition, the City of Watsonville has kick-started a photo sharing contest to go along with the project, encouraging community members to share photos and short videos of their favorite Watsonville trees on the city’s social media platforms, using the hashtags #watsonvilleurbanforest and #watsonvillebosquerbano.

“Watsonville has all these amazing natural resources,” said Landa Rosebraugh of Regeneracíon — Pajaro Valley Climate Action. “It gives us so much. We need to be sure to protect that.”

For information on upcoming tree plantings and other events, visit watsonvillewetlandswatch.org. 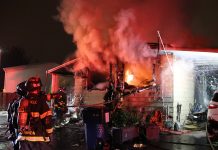 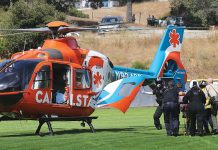 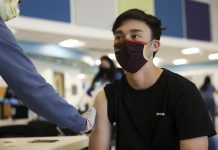 JOHANNA MILLER - September 30, 2022
Note: reporter Todd Guild contributed to this report SALINAS—The pesticide Telone–also known as 1,3-D–is thought to be so dangerous that it is banned in 34...