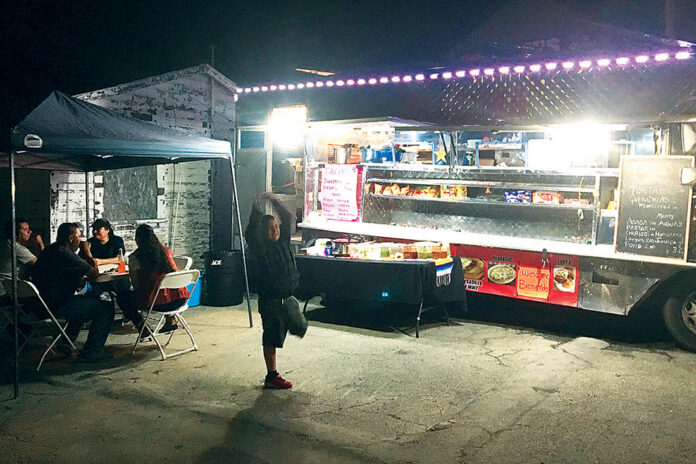 WATSONVILLE—The Watsonville City Council will hold a study session on food trucks near the end of its Tuesday evening virtual meeting.

The item was included in the meeting’s agenda released Thursday evening, but there was no staff report attached to it, causing confusion and worry among food truck owners operating in Watsonville.

According to the agenda, Community Development Department Director Suzi Merriam and Watsonville Police Capt. Jorge Zamora will give a presentation on the item, the City Council will be able to ask questions and then the public will have a chance to give feedback. But the City Council will not be tasked with making any changes to its traveling merchants ordinance.

Mayor Jimmy Dutra in a phone call Friday evening said the item was brought forth by city staff that has for several years received complaints that some food trucks are eating into brick-and-mortar businesses’ profits and operating without the proper permits.

He stressed that Tuesday is simply a chance for the public to gain information on the subject and voice its opinions and concerns.

“People should show up if they want to talk about it and discuss issues about it,” Dutra said. “That goes for food vendors and that goes for the brick-and-mortar stores.”

The item is scheduled for the evening session of Tuesday’s meeting, which starts at 5:30pm. It is the final item on the agenda.

To see the agenda and join the meeting click HERE.

The City Council last updated its rules around mobile food vendors in 2008. They established when, where and for how long those vendors could stay and what permits they needed to operate within city limits.

Mobile food vendors require a permit from the police department and a business license from the city. They also need to pass an inspection from County Environmental Health and the fire department.

According to the municipal code, mobile food vendors can only operate in residential areas and they can only stay in one location for no more than five minutes. But an exemption baked into the rules undermines those restrictions, and essentially allows them to remain in one place in perpetuity, so long as the property or business owner, in writing, gives them permission.

Concerns about food trucks undercutting brick-and-mortar locations is not a novel issue in Watsonville. When the city tried to leverage the burgeoning industry in 2012 by starting a weekly food truck gathering downtown, business owners expressed concern that they would eat into their already thin profits, increase litter and create a negative image for the city.

In 2015 the City Council also held a study session. Dozens of food vendors, worried that their livelihood would be chopped, showed to the council chambers to push back on a rumored food truck ban. The City Council then directed staff to educate the vendors about the needed permits and to help streamline the permitting process.