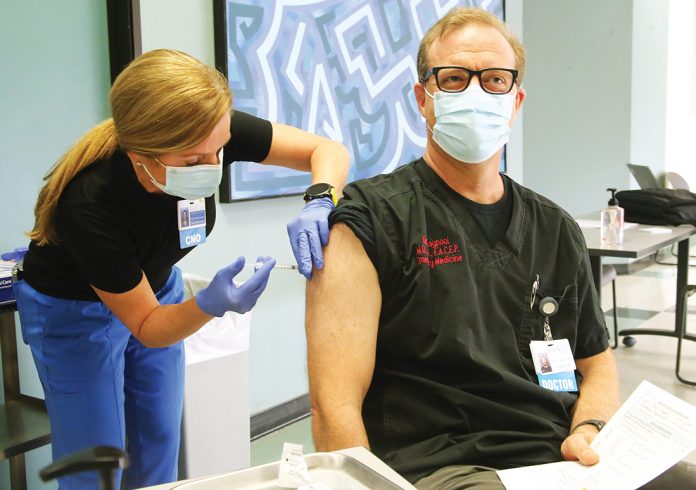 WATSONVILLE—Working as an Environmental Services Aide at Watsonville Community Hospital, Benjamin Lamsen cleans rooms in the Emergency Department and the Intensive Care Unit. That work has been challenging, he says, since the Covid-19 pandemic began its spread across the globe. In addition to increased numbers of patients needing care, he and his colleagues must constantly worry about contracting the virus.

On Wednesday, Lamsen became one of the first people in Santa Cruz County to receive a Covid-19 vaccine.

Lamsen was among the frontline workers across the U.S.—a group that includes doctors, nurses and other medical professionals—who are receiving the first doses of the vaccine from Pfizer drug company.

Out of the 656 employees at WCH, about 400 are considered frontline. They will be given their vaccines over the coming weeks, says Assistant Administrator Matko Vranjes.

Receiving the vaccine is voluntary, but most employees are signing up for theirs, he said.

“Our staff is taking this very seriously,” he said. “They are excited that the vaccine is available.”

Respiratory Therapist Travis Stevens, who has worked at WCH for 20 years, says the influx of patients has been a challenge.

“I’ve never seen anything like this before,” he said. “Now, I’m happy in a way that I can protect myself a little bit.”

Emergency Room Doctor David Claypool, who was also receiving a vaccine, says that he sees patients every day who have the virus. While some have mild symptoms, those considered medically vulnerable are at much greater risk.

“It ravages the body,” he said.

Claypool says the vaccine is 90% effective, a significant number compared to the influenza vaccine, which is 40-60% effective.

“This is a very effective vaccine,” he said.

As the vaccine began to be delivered the California, Gov. Gavin Newsom on Monday introduced the “Vaccinate all 58” campaign, to assure the vaccine is fairly distributed.

Even with the vaccines likely going to the general public sometime next year, Claypool says that everyone should still wear masks, practice social distancing and comply with other measures created to slow the spread of Covid-19.

“This is not going to stop the surge,” he said. “But hopefully this will prevent future surges as we get more and more vaccinations out there into the community.”