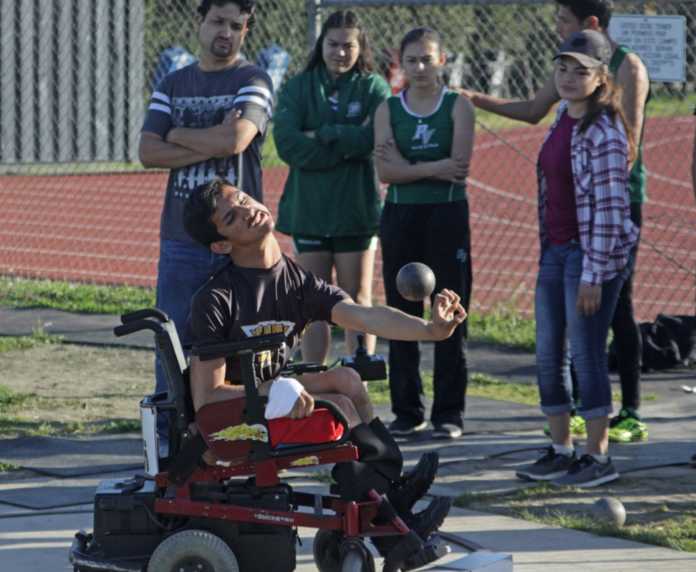 WATSONVILLE — Carlos Vasquez, described as outgoing, warm and sociable, doesn’t have many regrets in his young life.

In fact, he might only have one: not throwing shot put sooner.

Born with ataxic cerebral palsy, Vasquez did not take track and field coach Rob Cornett seriously when he asked if he’d be up to compete in the event during his junior year.

Vasquez, now a senior at Watsonville, is only half-joking — a statement that captures the true essence of his personality. Twenty feet might be out of the question, but 10, he says, is what he wants to hit before the season is over. And yet, even if he doesn’t reach the double digits, he predicts the season will be a success.

His participation in track and field is somewhat of an act of defiance — internally and externally. He wants to push his limits as an athlete and person, and he also wants to challenge his peer’s beliefs of people with disabilities. Because of his condition, he uses a wheelchair, he has a speech impediment and his motor skills are disorganized at times. But he doesn’t want his cerebral palsy to define him. A straight-A student with a gigantic personality, Vasquez wants to break down barriers one shot toss at a time.

“I feel like I’m part of the student body when I’m out here,” Vasquez said. “Being one of only two people in a wheelchair, it’s hard to tell them that we are the same. We always get seen in this, ‘Carlos is in a wheelchair’ kind of way. I want to prove to them that we can all participate in a sport. I want to educate the community. I hope to bring change.”

Inspired after watching high school para-athletes compete at the CIF state meet two years ago, Cornett asked Vasquez if he would be interested in throwing shot put the following season. Cornett thought Vasquez had forgotten his offer, but was pleasantly surprised when he showed up for the first day of practice a year later. Working with Vasquez’s physical therapist, Steve Martin, and his psychologist, Ralph Howe, the two started poring through YouTube clips and learning the restrictions and regulations for the adapted shot put.

Vasquez started by using a bocce ball to simulate the size of the shot, and get comfortable with holding a ball above his shoulder and nestled into his neck. A couple weeks later, he had moved up to the six-pound shot and in two weeks, unbeknownst to Cornett, he had not only made the move to the eight pounder but set his current personal record in practice of 7-0.

“I said, ‘with the six-pounder? That’s awesome,’” Cornett said. “He goes, ‘no, eight pounder.’ I was like, ‘what?!’ We were giving each other high-fives. It was awesome. That’s been his progression. I’m going to leave it up to faith, but I think he’s going to keep getting better.”

He tossed a competition personal record of 4 feet, 7 inches in Watsonville’s first Monterey Bay League Pacific division dual meet against Gilroy High last week. It’s not where he wants to be, but it’s light years from where he started.

“Ultimately, he’s a part of our team,” Cornett said. “Our kids like him, and our throwers really like him. He’s a huge inspiration.”

Watsonville’s top thrower, senior Rolando Llamas, said watching Vasquez work in practice has inspired him to work even harder at his craft. Vasquez isn’t simply satisfied with showing up to practice, Llamas said. He is one of the hardest working and most inquisitive athletes on the team. If he doesn’t understand or needs help with a certain aspect of the shot put, he isn’t afraid to pick Llamas’s brain for advice.

“I was surprised when he came out here, because I didn’t know he was a sporty kind of guy,” Llamas said. “Now that he is out here, he’s trying to show everyone that he can actually do it and get rid of everyone else’s bad ideas. Watching him prove everyone wrong — that he can do it — is pretty amazing to me.”

His father, Gerardo, and mother, Veronica Aguilar, both said there was never any reservations about their son participating in track and field. Sports have always been a big part of his life. When he was younger, he played baseball in the challenger division and he has also played power soccer throughout the years. His son’s competitiveness and grit, Gerardo said, brings him great joy.

Vasquez said he has a grade point average above 4.0, has taken four advanced placement (A.P.) classes over the last two school years and loves to participate in class. Currently, he’s taking A.P. literature and composition, and A.P. political science. He said he could have coasted through his senior year, but instead wanted to challenge himself to be more outgoing and improve his ability to think outside the box.

“Those are two skills that people need in this world,” Vasquez said. “Our world is changing quickly, and people also need to think quickly as our technology advances.”

As of Thursday, he was accepted into CSU Monterey Bay, San Jose State and UC Merced. He was also waitlisted at Santa Clara and UC Santa Cruz and was waiting to hear back from UC Berkeley. His dream school, Stanford, turned him down.

“I wasn’t sure what happened,” Vasquez said of not getting into Stanford. “At the end of the day, like my mom says, ‘any university you go to, you will get a good education, if you put your mind into it.’”

He plans to pursue a degree in political science or English. He also didn’t rule out the possibility of a double major.

Vasquez said his normal day might be filled with more obstacles than those without cerebral palsy, but said he doesn’t want anyone to feel sorry for him. He wants people to look at his life, his actions and his ambitions and be inspired to follow their dreams and live the life they want.

“I want people to never give up and always pursue your dreams no matter how unattainable they may seem,” Vasquez said. “Like, throwing shot put seemed impossible for me, but here I am at my first competition. I’m never giving up, and people shouldn’t give up either. You only have one life and you need to make it count. No matter what your passions are, you can never give up and you need to keep going, even if the days get rough.”